Like all major capitals in the world, the city of Algiers has developed its underground railway system. Regardless of the circumstantial uncertainties that this project has coped with, today the Algiers Metro has blossomed into reality.
The first project of the Algiers Metro dates back to 1928, but it was not until the end of the 1970s that the actual metro initiative was launched to face the demographic explosion of the city and the resulting need for public transport.
Started in the 1980s, its construction was slowed down due to financial difficulties and a sense of insecurity that marked the 1990s. The project was relaunched in 2003.

Trevi has played a key role in the development of this challenging scheme. Indeed, since 2004, Trevi has been involved in the construction of all foundations and soil consolidation activities associated to the project.
Due to the high heterogeneity of the soils underlying the city of Algiers, different technical solutions and equipment have been adopted for the construction of the retaining walls in correspondence of the stations and service shafts.
Continuous diaphragm walls and cased secant pile walls (CSP) have been implemented in the areas where the subsoil was characterized by fine-grained formations associated to a high water table, while contiguous bored pile walls were generally executed in cohesive soils.
Next generation equipment and tools have been used to this purpose.

The diaphragm walls have been performed by means of compact and semi-compact hydromills, thanks to their capability to cross and penetrate into dense and hard formations without producing noise and vibrations. Similarly, advanced rotary or CSP piling rigs have been used to execute the piles in the other locations. Temporary or permanent strand anchors have been generally adopted for anchoring the retaining structures. All ground anchors were performed step by step by following the excavation of the soil within the retaining structure and were subsequently assembled in dedicated sheltered areas established at site.
The double-fluid jet grouting technique has been widely adopted to improve the characteristics of the soil around the profile of the mined tunnels to be excavated or to create “impervious” plugs at the bottom of some stations in order to counteract the hydrostatic pressure. 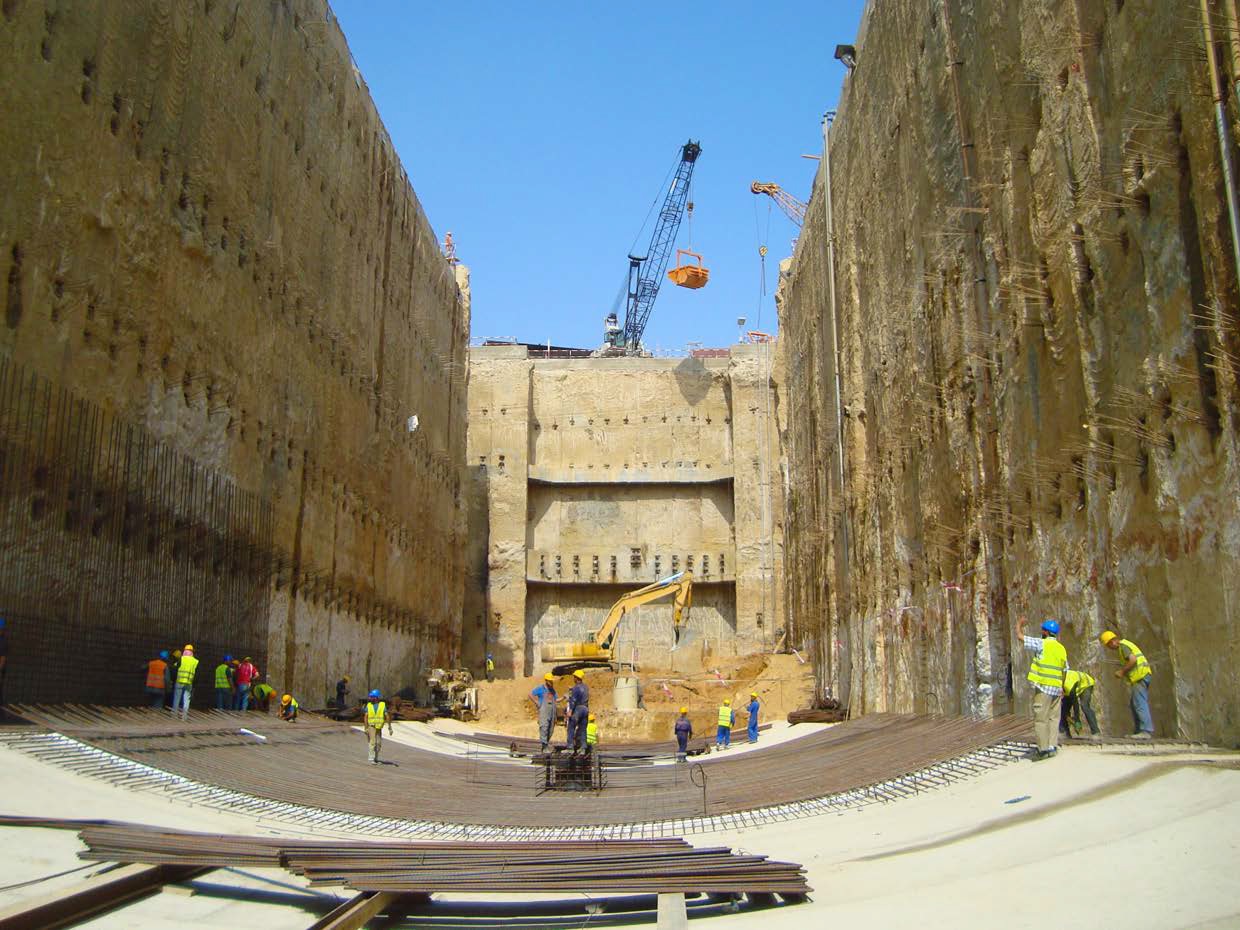 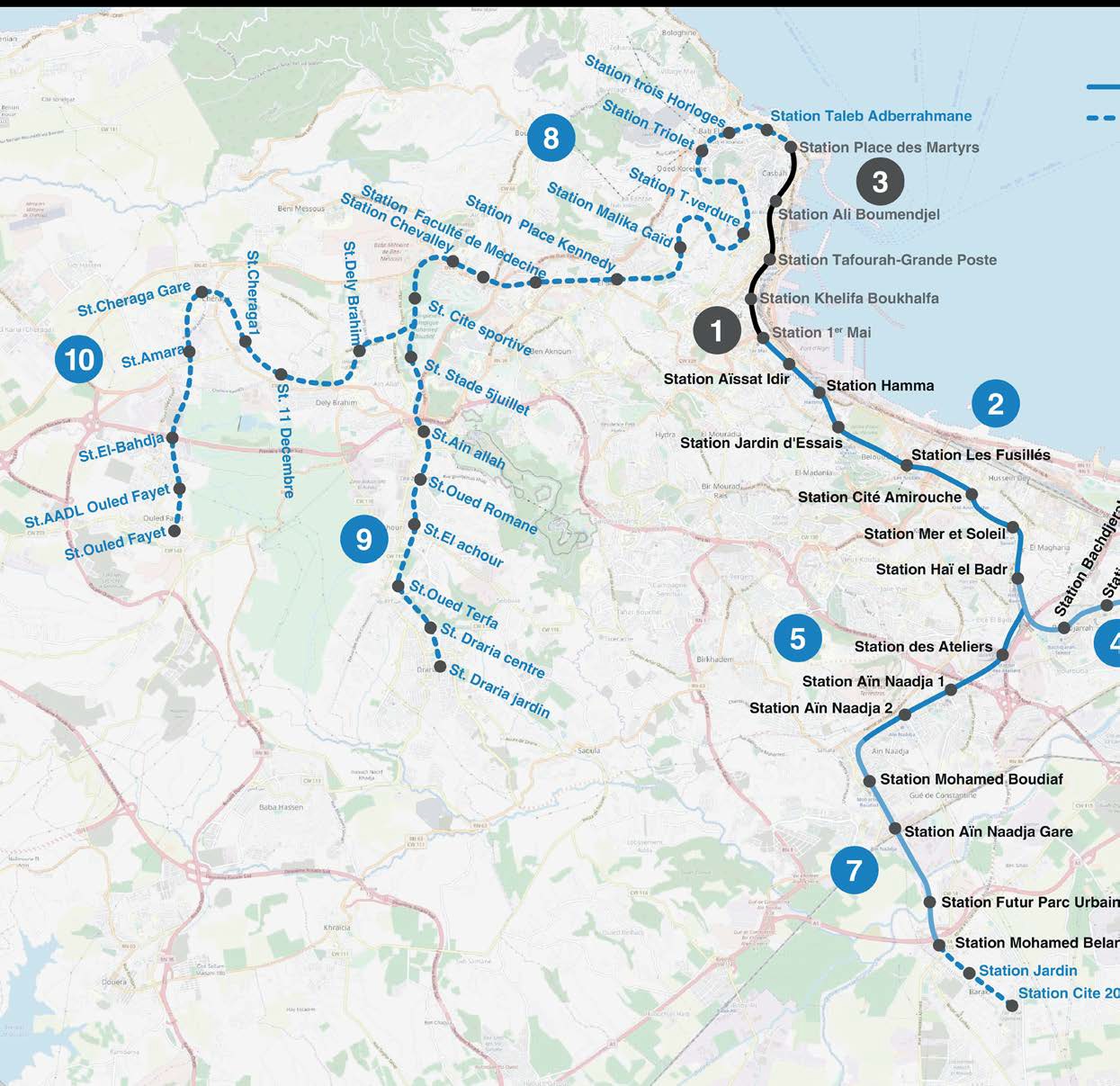 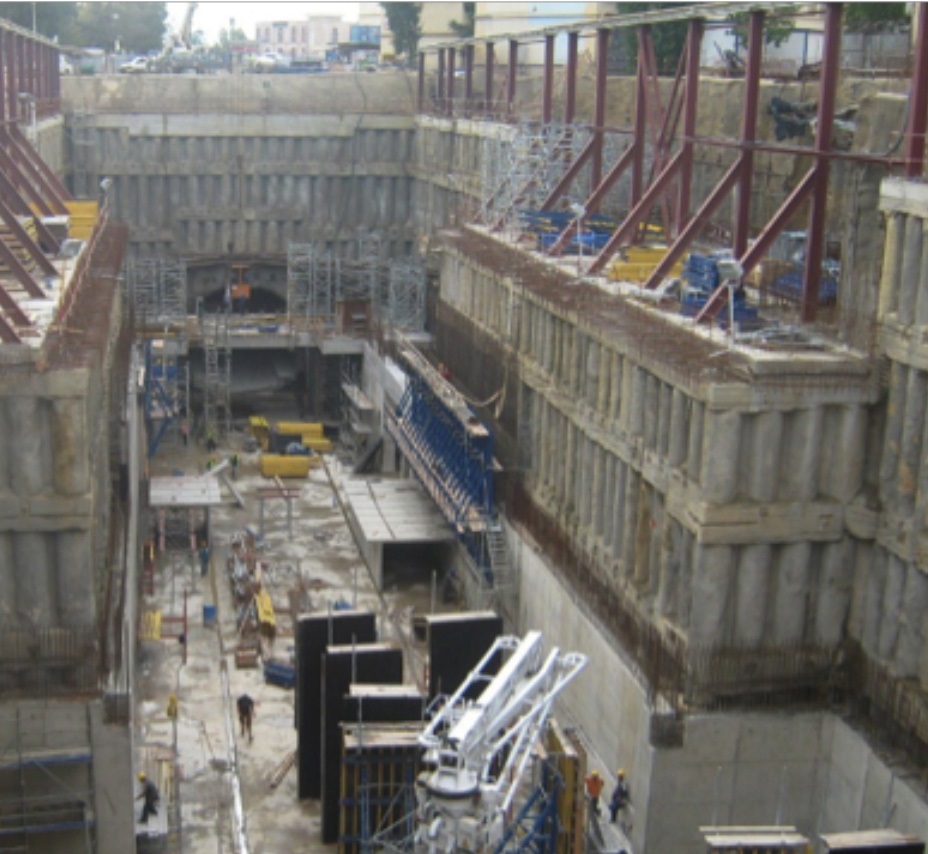 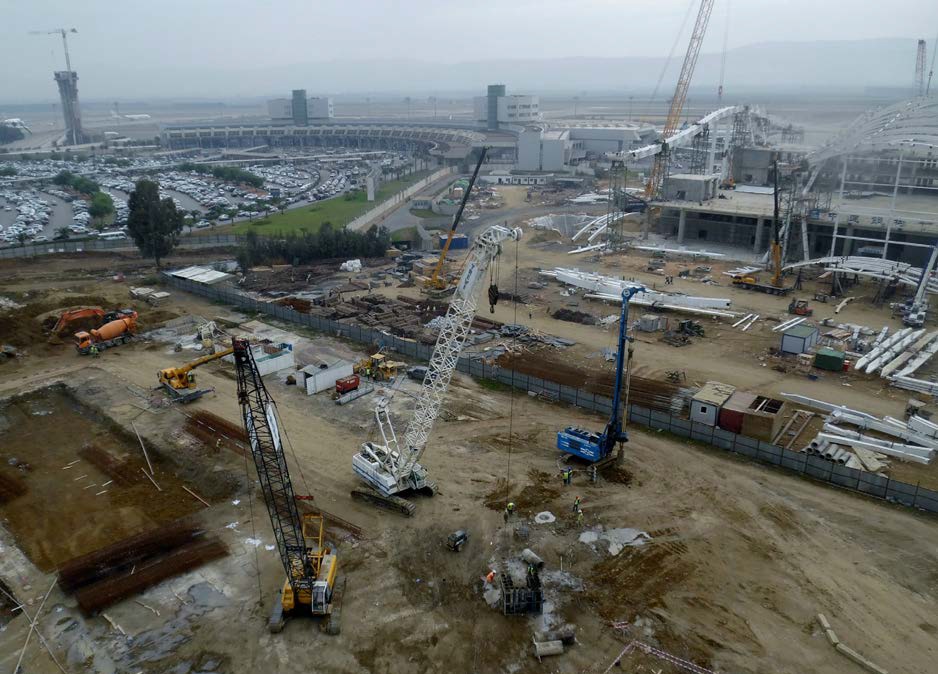 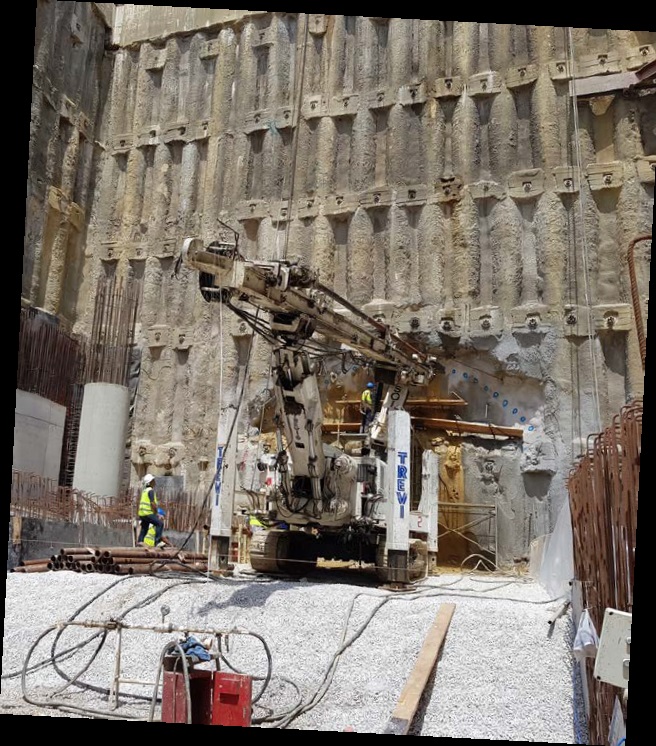 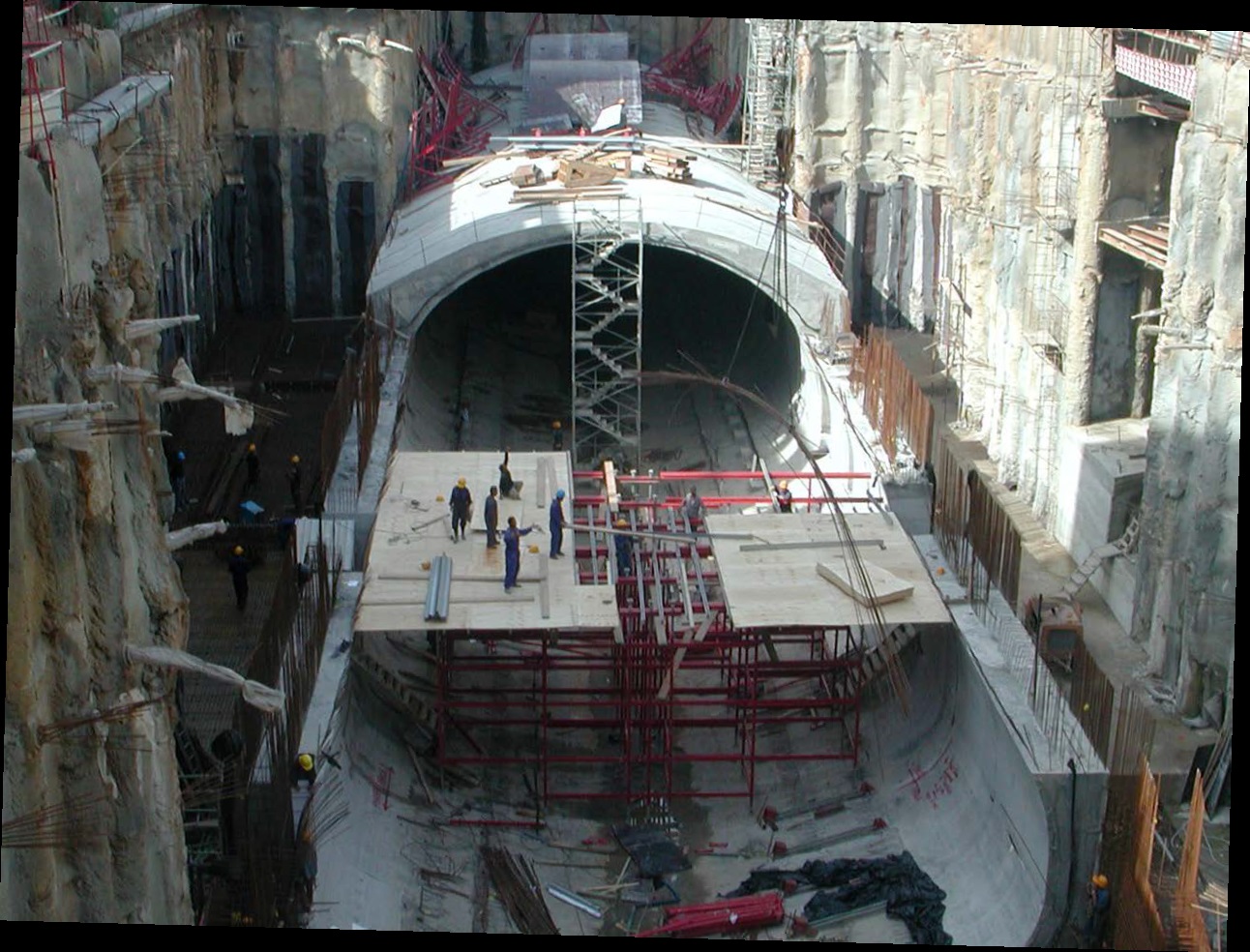 Works lasted from September 2003 to February 2006 and were entrusted to the Algerian-German consortium Gaama, composed of Dywidag International (51%), Cosider TP (35%) and Infrafer (14%) for a total of Euro 145 million. The project management was entrusted to the French company SYSTRA.

This 4-km-long section covers four stations (Bachdjarah Tennis, Bachdjarah, El Harrach Gare and El Harrach Centre), a 280-m-long viaduct, a 408.48-m-long rectangular tunnel, a 2166.54-m-long underground arched tunnel and three air extraction  plants. The Algerian-German consortium GDCT, made up of DIWYDAG, COSIDER and TREVI, carried out the civil engineering works for this extension. The project was completed in 47 months.

The construction works for the extension of Line 1 of the Algiers Metro, connecting the city centre of El Harrach to the Houari Boumédiène International Airport, were entrusted to Cosider TP and have been underway since June 2015.
With a length of 9.5 km and 9 stations, this line will serve densely populated areas such as Beaulieu, Oued Smar, Cité 5 juillet, Bab Ezzouar, the University Centre of El Harrach, the Business Centre of Bab Ezzouar and the Houari
Boumédiène University. This line will also link the tramway to the Houari Boumédiène University intersection and will provide this station with a multimodal transportation.
The ten stations making part of this extension are: Hassan Badi, Pôle Universitaire, Beaulieu, Oued Smar, Université Houari Boumediene, Rabia Tahar, Smail Yefsah, Centre des Affaires and Aéroport.

The extension of the Algiers Metro going from Aïn Nâadja to Baraki stretches over 6 km with 3 stations and a 1,453.50-m-long viaduct that connects the Mohamed Boudiaf station to the Mohamed Belarbi station. It crosses the SNTF railway line, the  National Road N°38 and Oued El Harrach and comprises two elevated stations: the Aïn Nâadja Gare station and the Futur Parc Urbain station.

Railway Station of Gué de Constantine and the future intermodal station of this municipality. COSIDER TP was awarded the civil engineering contract for this extension. The stations of this extension currently under construction are: Mohamed Boudiaf, Ain Nâadja, Futur Parc Urbain and Mohamed Belarbi.

Works for the following stations are in progress.
Station Jardin - Station Cité 2004