The U.S.Army Corps of Engineers is constructing one of the deepest secant walls in its history directly upstream from the Walter E George Lock and Dam, located on the Chattahoochee River near Fort Gaines, Georgia. The wall-which will take two years and $50 million to construct-is an attempt to eliminate seepage through a porous limestone formation beneath the dam.

With a minimum thickness of 2 ft (0.6 m), the wall will extend from a concrete projection at the base of the dam and pass through three distinct layers of limestone before reaching a depth of about 90 ft (27 m) below the lake bed. The wall will extend 1,830 ft (558 m) beyond the entire length of the concrete dam. The water in the lake  is more than 100 ft (30 m) deep.  Don Simpson, the resident engineer of  Mobile  district of the Corps, says the Corps has never before constructed a secant wall at such extreme depths.

The wall is being constructed as a series of overlapping drilled shafts, each 50 in. (1,250 mm) in diameter. In june crews began lowering a 54 in. (1,350 mm) diameter steel casing from a barge to depths of up to 140 ft (43 m) to points on the lake bed where the secant wall was to be constructed. At each point crews lower a drill bit to the bottom of the casing, then drill through the limestone until they reach a layer of sand approximately 90 ft (27 m) deep. During the drilling process the shaft is kept filled with water to maintain pressure on its interior. After the verticality of the shaft is checked with an inclinometer, crews fill the shaft with concrete. The concrete used to form this pile contains bentonite clay and has a strength of more than 1,600 psi (11,000 kPa). 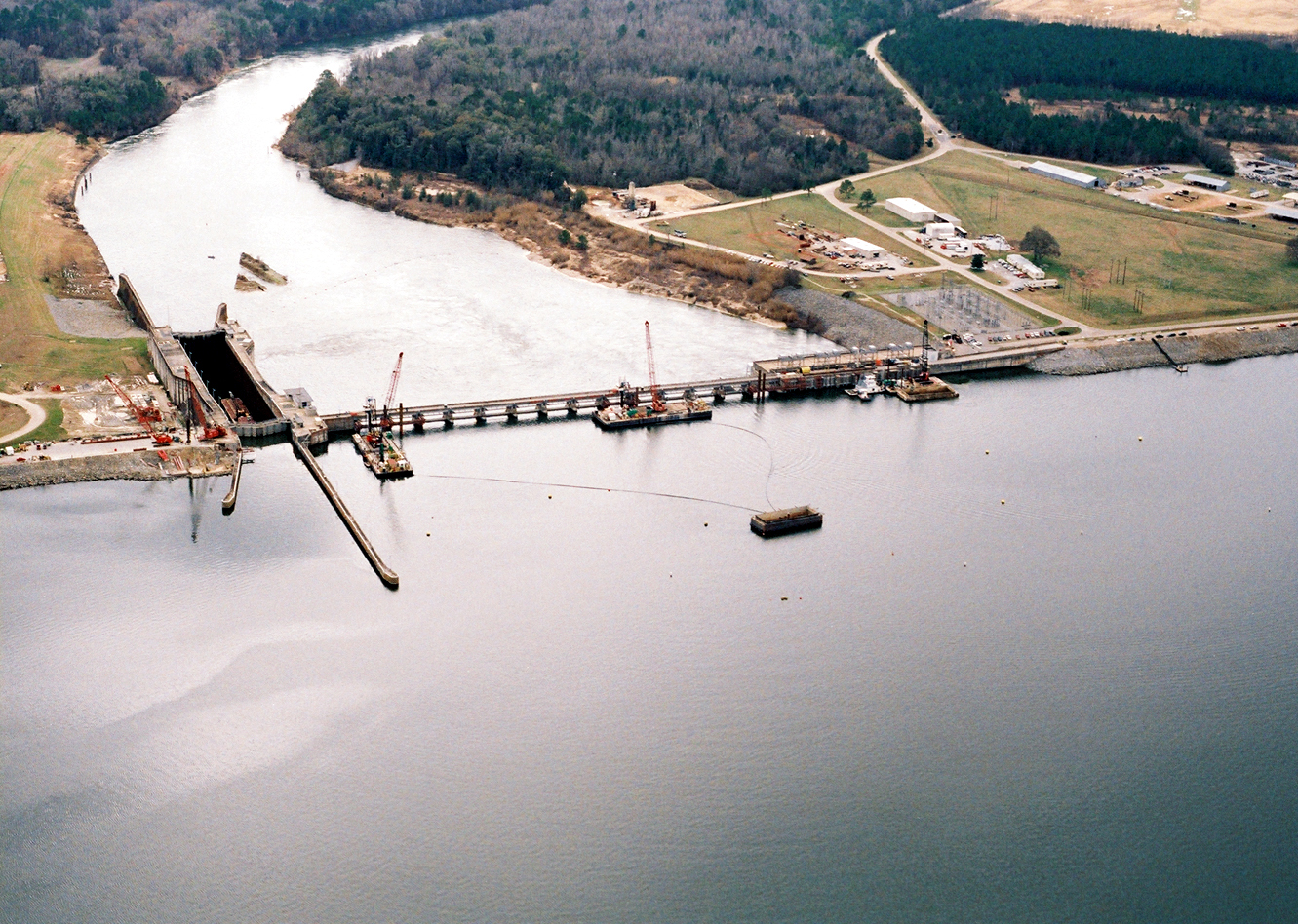 With one pile in place  crews leave a space of 16 in. (406 mm) before drilling the next shaft. After filling several shafts spaced in this way and allowing each to cure for approximately seven days, crews go back and drill a series of secondary shafts, also 50 in. (1,250 nun) in diameter, centred  on the 16 in. (406 mm) gaps between the preliminary piles. The secondary shaft overlaps the two preliminary piles on either side of the 16 in. (406 mm) gap by about 10 in. (254 mm), thereby cutting out about 30 percent of the concrete from each. When the secondary shaft is drilled to the appropriate depth, it too is filled with concrete, closing the gap between the two preliminary piles and creating a section of the wall. The secant line  between the two intersecting piles is required to be at least 24 in.(610 mm).

The secant wall was designed and constructed for the Corps by a joint venture between the Treviicos Corporation, based in Boston, and the Rodio Group, based in Milan, Italy. Simpson says the project is on schedule and should be completed in September 2004.