The State of Denmark together with the Municipality of Copenhagen, launched in 2010 a complex Project for the construction of the CITYRINGEN, a new Subway Line.

Copenhagen is the capital of Denmark with a metropolitan population of 1.9 million. TREVI was the primary foundation subcontractor, involved for the construction of a total 17 stations and 4 ventilation shafts.

An impressive fleet of equipment was involved for the works: up to 10 drilling rigs for the construction of secant pile walls, and 4 hydromills for diaphragm walls, plus additional small diameter drill rigs and cranes.

The CITYRINGEN is a ring placed in the city center, with 17 stations and 4 ventilation shafts.

The construction of the new double tracks line involves the use of a 5.7 metre large tunnel boring machine (TBM) for 13.6 km twin tunnel, 1.3 km sprayed concrete lining (SCL) tunnel and caverns, as well as a 340 metre long cut-and-cover tunnel and ramp section.

The Copenhagen Metro is state of the art in the world today from a functional and technical point of view, but also from architectural perspective.

The passengers have been the focal point of the Metro Project. Trains will be running fast and frequently. Furthermore, as the passengers do not only want to be safe but also to feel safe, the Metro stations are designed as open spacious rooms with daylight even down to the underground platforms. Platforms screen doors on underground station give extra comfort and a safe feeling when the train enters the station.

The trains are driverless but most of them are manned with stewards in order to make the journey comfortable and safe for the passengers.

The Cityringen Metro line will serve 240.000 passengers per day. A total of 28 trains with Automatic guidance and control system (ATC) will run at 100 sec. intervals. The average speed of the trains is 40 km/h, stops included. The entire ring tour will take about 24 min. 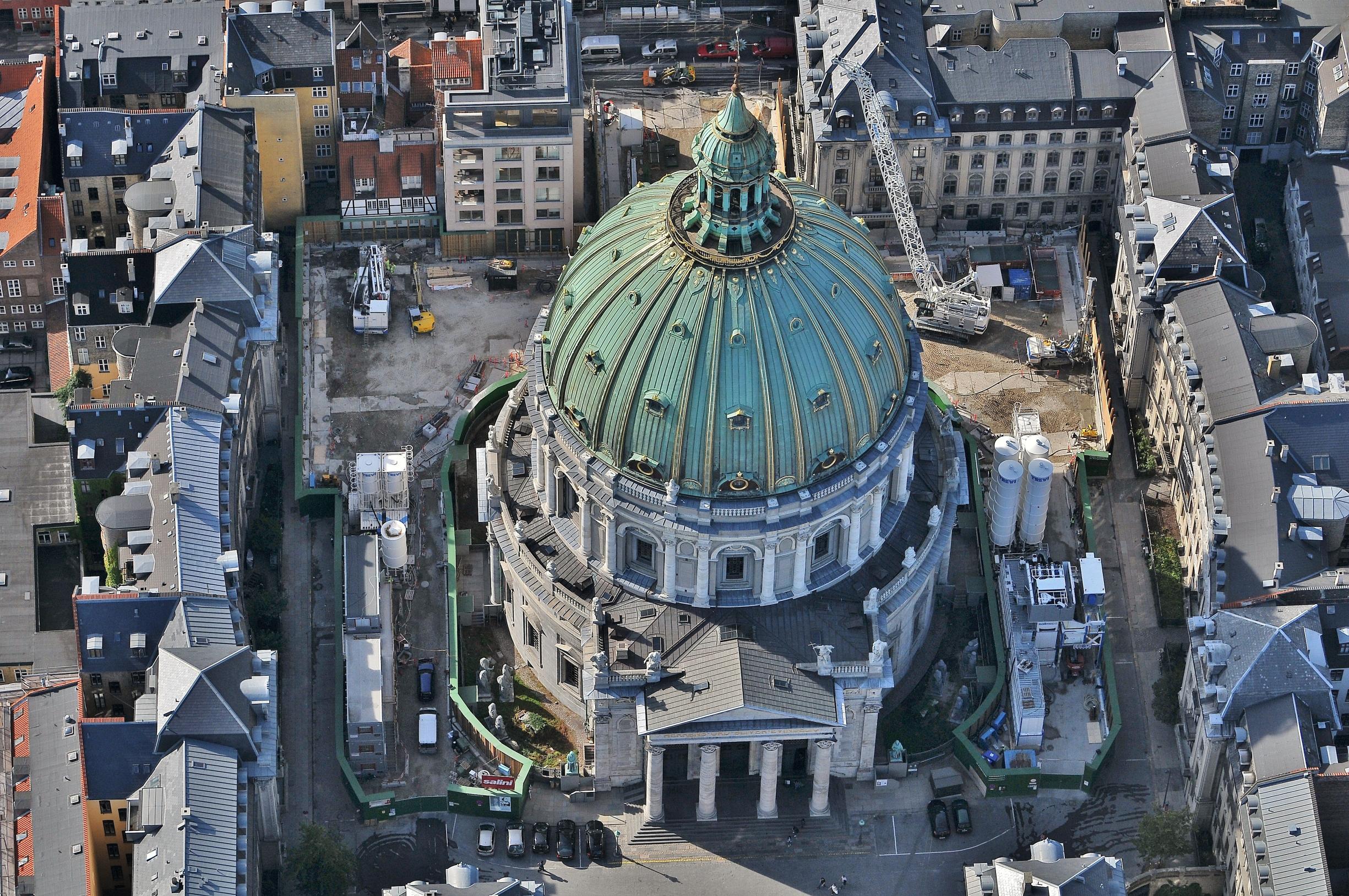 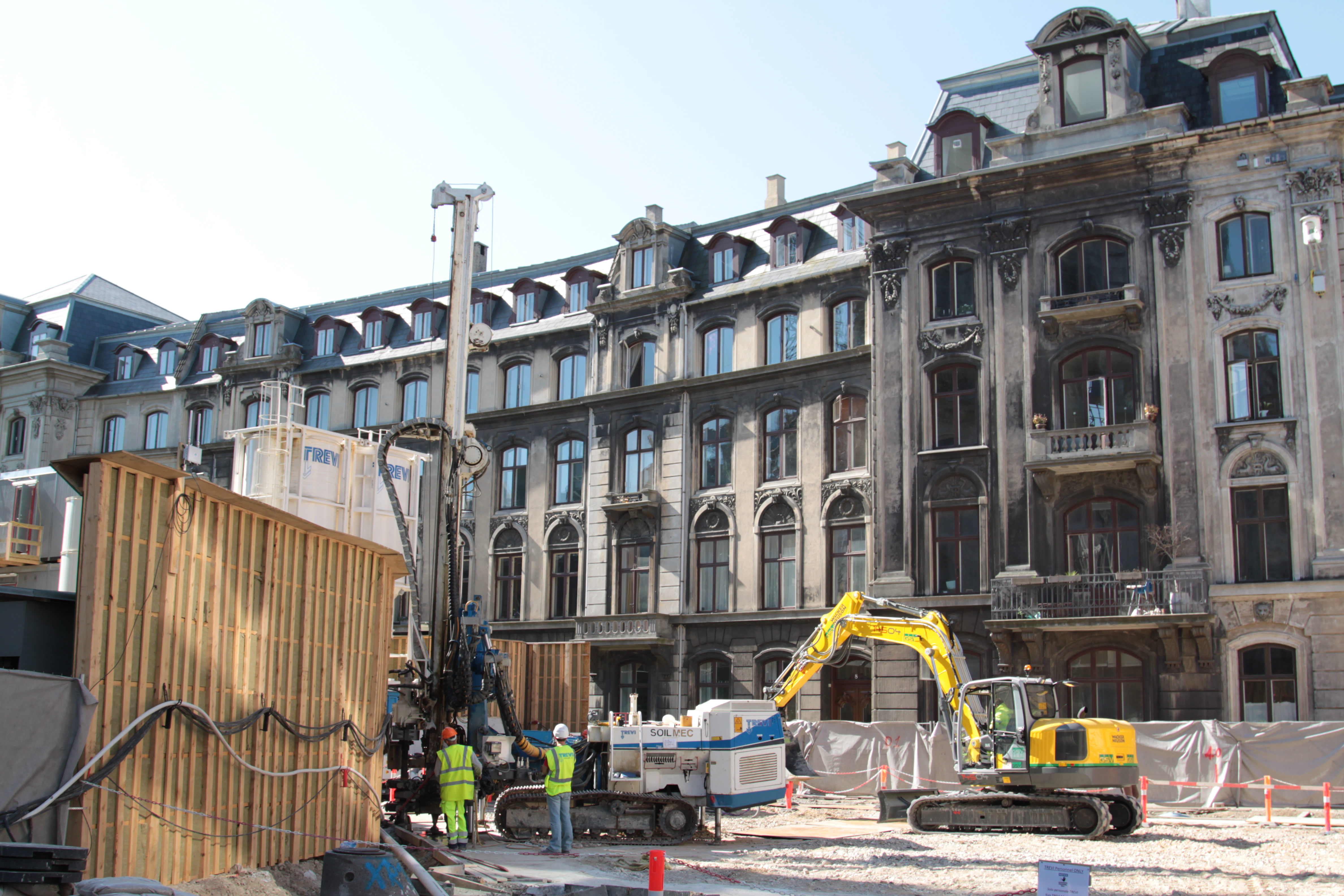 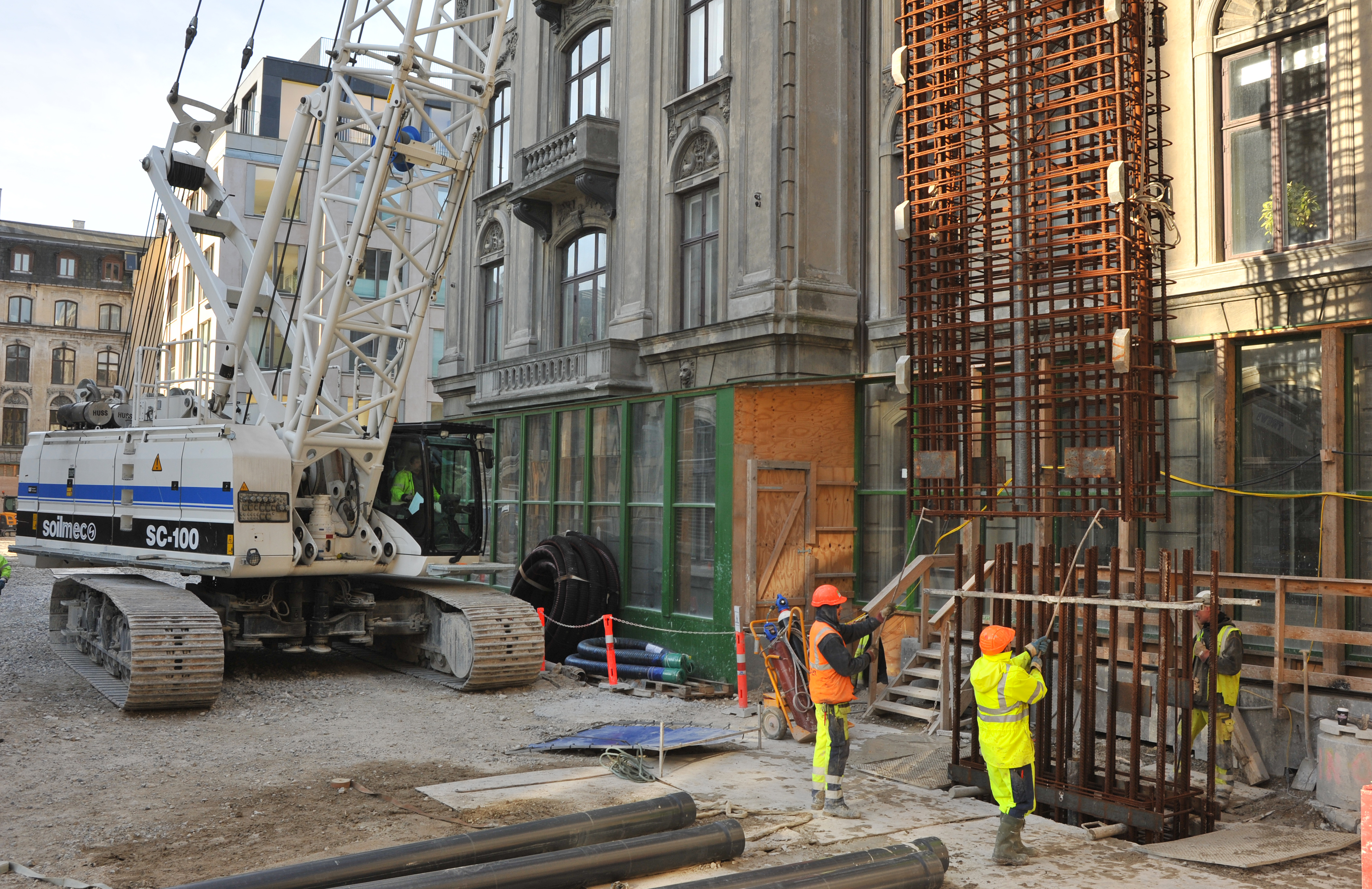 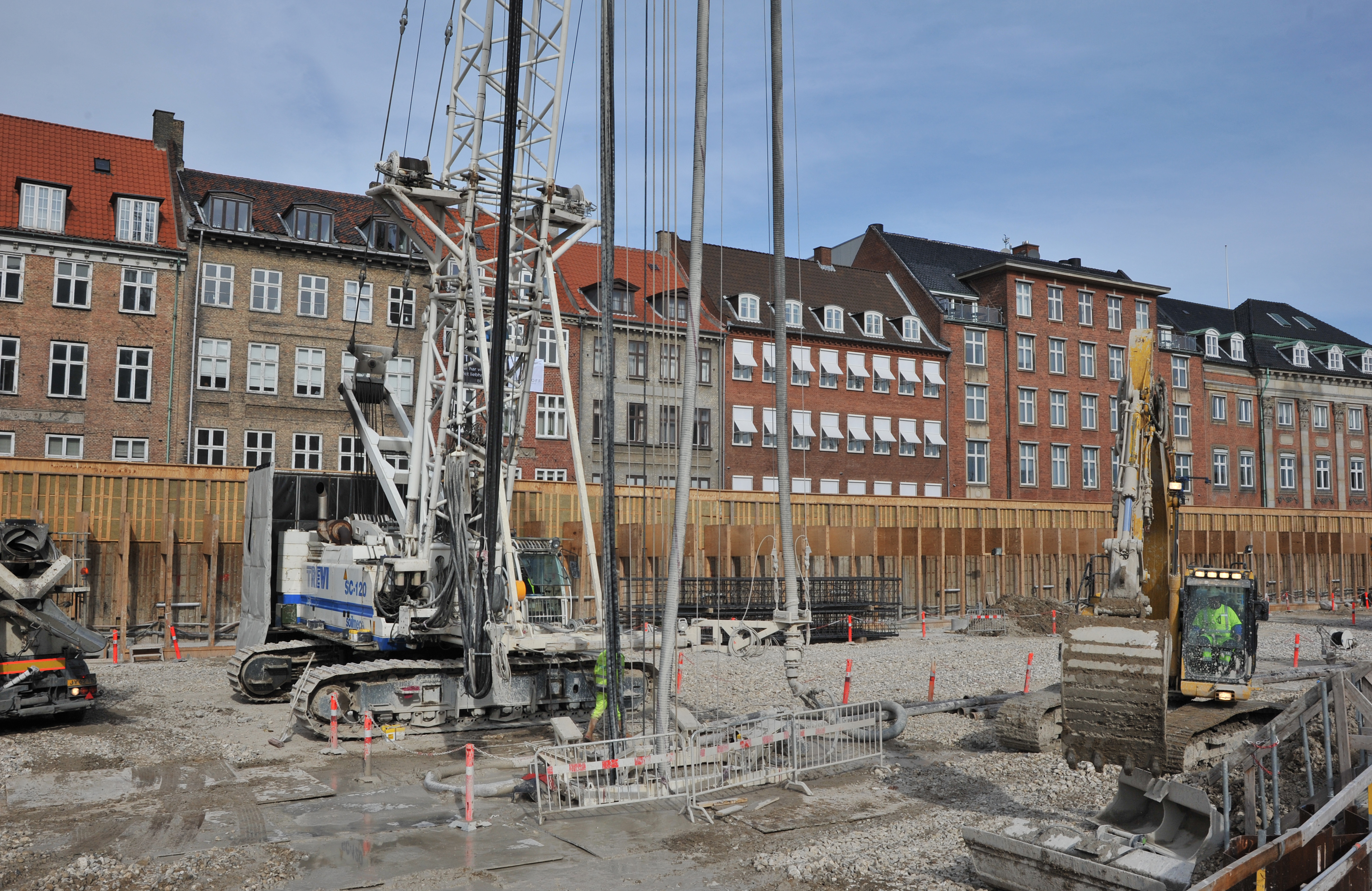 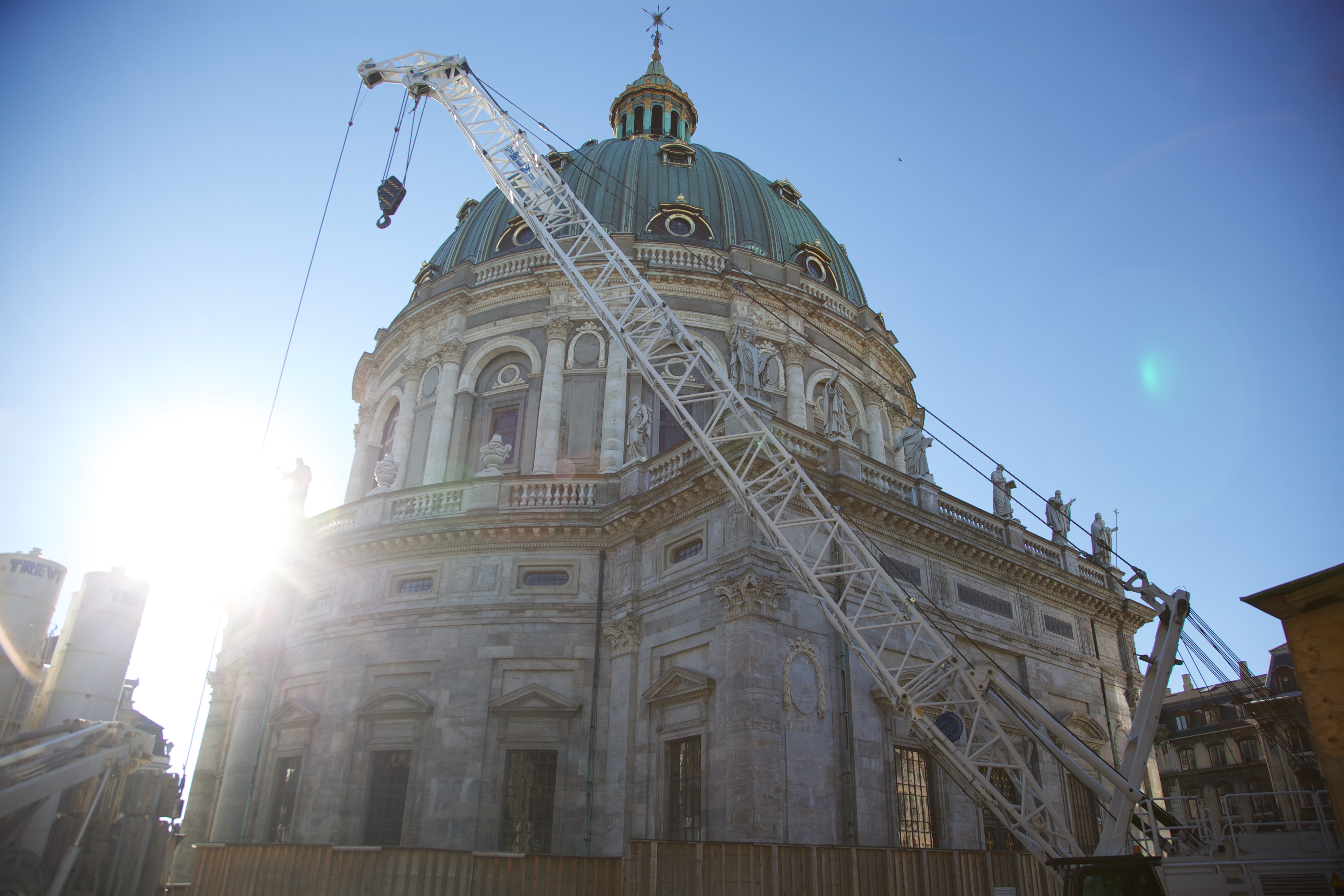 The underground stations for CITYRINGEN are typically around 70 metres long and 20 or 22 metres wide, with 7 or 9 metres wide platforms, typically at approximately 19 metres below ground level. The Metro is characterized by a simple, clear, unpretentious, and functional style. Excavation of the stations from surface down to the deepest level was carried out under the protection of diaphragm walls or secant pile walls.

The working phases for the construction are as follows:

- Phase 3:TBM Drilling of Tunnel through break-in and break-out blocks.

As primary foundation subcontractor, TREVI deployed approximately 250 workers on 21 separate construction sites managed by the joint venture CMT (Cityringen Metro Team). TREVI was responsible for the construction of the permanent supporting walls for all stations and service shafts.

The TBM construction will primarily be through the Copenhagen limestone. In the northern part of the tunnel, the TBM will also bore through the overlying quaternary soil. The tunnel depth varies from approximately 20 to 35 metres.

Across the new line, the soil consists of 2 main groups:

- Upper sediments of the glacial ages, (5-20 m thick), composed by clay, silt, sand, gravel and cobbles. Granite boulders and flint are also present in blocks and layers. Frequency and size of these obstructions cannot be determined.

- Limestone, with lenses of flint up to 3 m thick, it is divided in 4 main levels:

Laboratory tests on samples of flint resulted in remarkable UCS values between 400 MPa and 700 MPa.

Severe safety measures and procedure have been enforced to avoid any accident on site. Stringent limits for the exhausted gas emissions have been set, by far tighter than those applied by the State of Denmark. Tight limits for noise emission have been established. During the works, particular attention was also paid to minimize the impact of vibrations, which was particularly challenging with the reality to deal with the hard flint layers.

During works, particular care was paid to the water management, as the ground water in a part of the areas of the Cityringen supplies the drinking water network of Copenhagen.

TREVI was involved for the construction of 17 stations and 4 ventilation shafts. Additional works were also required in particularly delicate areas, to minimize the impact of the excavation.

The city center comprises the most historical and monumental buildings and churches of Copenhagen. In this area the groundwater is shallow, with abundance of lakes and channels. The construction techniques adopted for these buildings were advanced for those times, but limited as far as regards settlements and resistance to horizontal movements. Copenhagen's dense, urban, historic downtown also offers only narrow construction and staging areas, and construction site were obviously in close proximity to existing buildings and structures. For example, walls for the Marmorkirken station are only 100 mm away from the foundations of the 260-years old Marble Church, the largest domed church in Scandinavia.

TREVI had to tackle many construction difficulties, as the challenging ground conditions with boulders and lenses of extremely hard and abrasive flint rock within the limestone.

The concrete mix for secant piles and hydromill panels has been designed to maintain the setting temperature under 65°C as per Danish code. The modification did not impact the final UCS values, but only the reduction of the heat quantity during the concrete setting.

In particular, TREVI scope of works involved the construction of the followings:

It can be said that Copenhagen was an ideal location to test out SOILMEC's equipment and TREVI's technology, which is designed to meet the challenge of limited construction space and strict environmental rules.  Using this equipment, Trevi has maintained the production schedule with a perfect safety record and successful compliance with all regulations.

For the execution of some stations, Metroselskabet accepted the proposal of TREVI to execute the walls with cased secant pile system for piles with max 28 m of depth, with excavation of the station down to 19 m. This system allows to excavate the pile using a temporary casing and a coaxial internal auger. When the design depth of the pile is reached, the auger is extracted as concrete is pumped from the tip of the auger. Immediately after, the steel cage of the pile is inserted in one single operation.

For the installation of 1000 mm piles CSP walls up to 10 SOILMEC SR-100 drill rigs have been used, to a maximum depth of 28 metres. In some stations, intensive pre-drilling was necessary to break through the hard layers of limestone and flint.

In order to minimize excavation problems for piling, a Wassara high-pressure water down-the hole hammer was used to pre-drill holes. However, sonic drilling was used in locations where water flushing was not allowed due to soil contamination. The use of these pre-drilling techniques has doubled the speed of production.

The tools had to be significantly improved to excavate through the hard and extremely abrasive flint layers.

Materials and design of the casings, crowns, and augers were significantly changed.

During excavation of each panel, a bentonite slurry is used to stabilize the trenches. The verticality of every diaphragm wall panel has been check 3 times with the Koden during the excavation in order to verify the achieved compare to the requirements. As additional measure the panel have been continuously checked with the DMS (Drilling Mate System), the electronic monitoring and controlling system mounted on SOILMEC rigs.

TREVI used the “Milano Joint” type, consisting of plastic pipes fixed to the rebar cages on both ends of the primary panels. As the secondary panel is excavated, the plastic pipes are partially cut, and the joint surfaces are scratched and cleaned with a special tool.

In this way the two panels are, essentially, keyed into each other. This technique reduces the bentonite contamination due to concrete cutting, while ensuring an excellent overlap and water tightness between panels.

In Copenhagen, the diaphragm walls are being constructed primarily using SOILMEC SC-120 cranes with a Cougar hydromill. A Caterpillar C27 diesel engine is driving the machine, instead of the standard C18, to provide the higher power needed to cut through the hard rock and flint.

SOILMEC developed a compact, self contained bentonite treatment plant that is used on-site to separate the bentonite mud. Cuttings are collected into a hopper and discharged directly into trucks.  At some stations, the areas are so packed that bentonite plant was stacked vertically. The bentonite plant at Marmorkirken station, for example, was 3 stories tall.

Copehagen's city ordinances were more stringent than European legislation on engines requirements. TREVI was required to use engines conforming to Tier Stage IV for Cityringen since the beginning of the work in 2012, whereas these engines started to be used in Europe in January 2014.

SOILMEC has been planning for this milestone for more than two years, and used the opportunity to completely re-vamp its product line. For two years, SOILMEC engineers have been deeply involved in troubleshooting and optimize the new line of drill rigs. The result is that the latest SOILMEC equipment not only exceeds the Tier 4 requirements, but also delivers more power, efficiency, and flexibility.