Orogel is Italy’s leading company in the production of frozen food, with a turnover of over 300 million Euros and with more than 2,500 employees. In 2015, 90,000 tons of product were processed. Orogel’s headquarters is located in Cesena, a few kilometers away from Trevi Group. Two leading companies - both nationally and internationally - two deeply different companies which have now found a synergy thanks to the construction of a new plant division, known as "OROGEL 3".

Project
Three new production departments, one refrigerated warehouse with a product selection department, and two 30 mt. high cold stores measuring 65 m x 120 m and 65 m x 80 m respectively, covering an area of about 45,000 m2, more than 6,000 m2 of which are used as a public green area. A project based on the latest criteria of environmental sustainability and technological innovation: "OROGEL 3" will be powered by a natural gas power station in order to recycle the heat which is eventually transformed into cooling energy; the water used for production will be reused, without producing any waste; the cold stores will be automatically operated. Trevi was awarded construction of the 120 m x 65 m cold store’s foundations.

The project of the foundation structures, designed by ENSER of Faenza, includes a mat foundation with a uniform width of 0.90 m, on top of which the heating layer, the thermal insulation layer, and the base slab of the elevated structure will be installed. Under this slab, soil consolidation was carried out by means of 486 concrete columns with a diameter of 800 mm (rigid inclusion) and with an effective length of 20 m, 26 m, 32 m, and 36 m, which were obtained via the CFA (Continuous Flight Auger) technology.

The columns, characterized by an increasing depth starting from the edges of the slab towards the middle, are arranged on a rectangular pattern measuring 3.3 ÷ 4 m x 4.4 m; the drilling depth is 0.6 m longer than the columns’ effective length. Said columns are not reinforced and will be used for soil consolidation, in order to reduce and regulate the settlement, therefore they do not have a “classical” structural function.
In fact, due the fully automated management of the production departments, the allowable settlements for this project were quite low:
- Maximum settlement < 10 cm
- Differential settlement < 0,5 ‰ (5 mm /10 m) 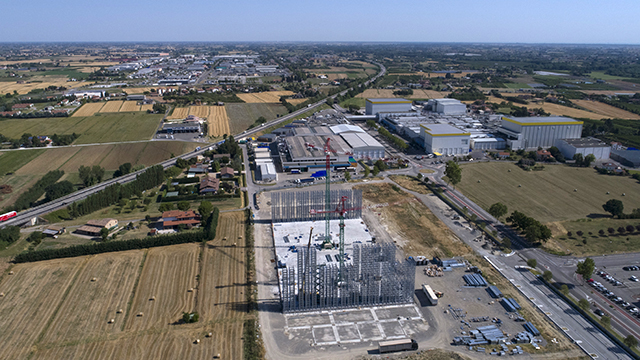 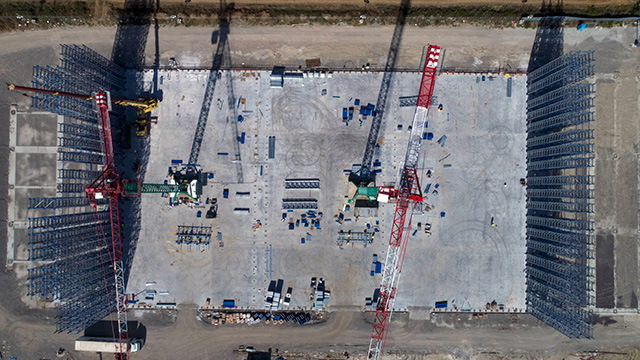 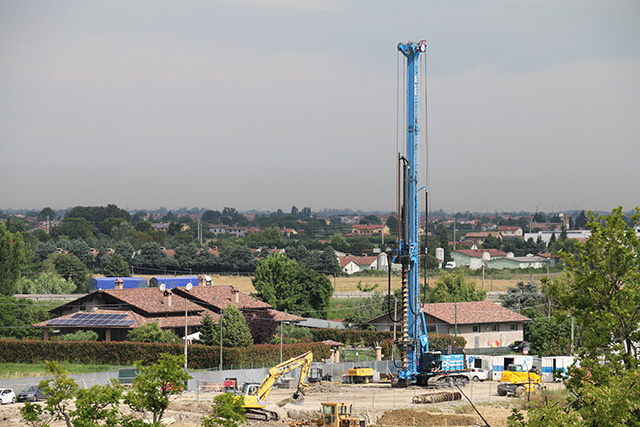