A.T.I. Trevi (Trevi - C.C.C.) is carrying out the second execution stage of the general project for the construction of a new Container Terminal and Sediment Tank in the Port of Naples, in the pre-existing eastern dock. The contractor is the Port Authority of Naples.

Construction activities relating to the implementation of the works began in July 2012, while preliminary activities, such as the clearance of explosive remnants of war, additional geotechnical investigations and ante operam environmental monitoring , were started from the month of September 2011.

The Terminal will be built by confining and filling the water surface of the dock and the area in the east of the eastern dock (extension of the Terminal which is about 200 m long) with the sediments dredged from the bottom of the port of Naples. For this purpose, the eastern dock must be completely waterproofed to form a sort of “box” with characteristics of permeability equal to K <10-9 m/s on all sides of the perimeter and on the base (no activities are envisaged on the latter by this contract). 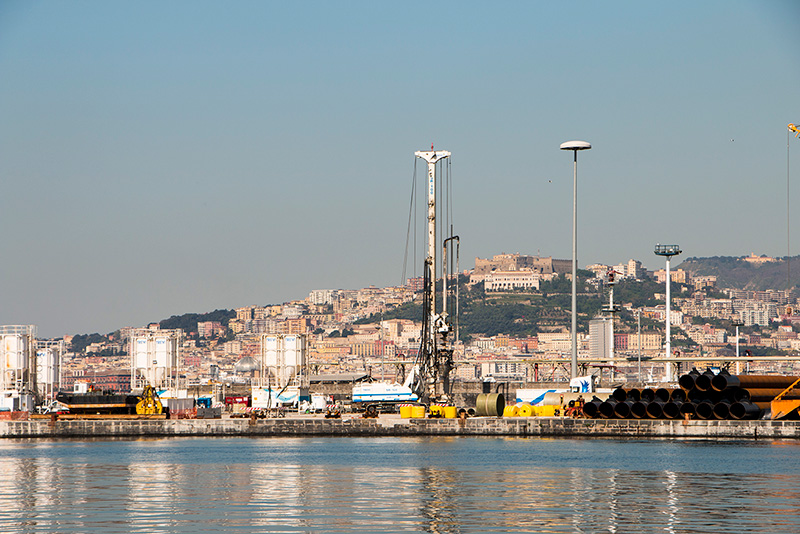 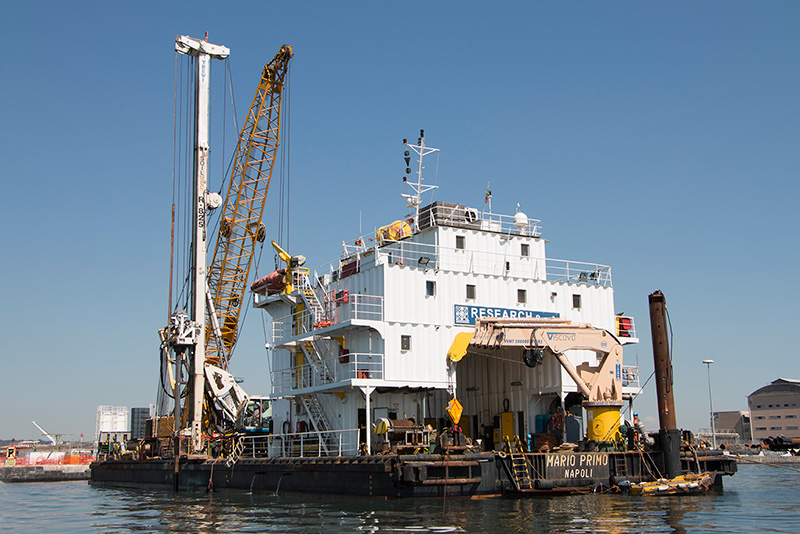 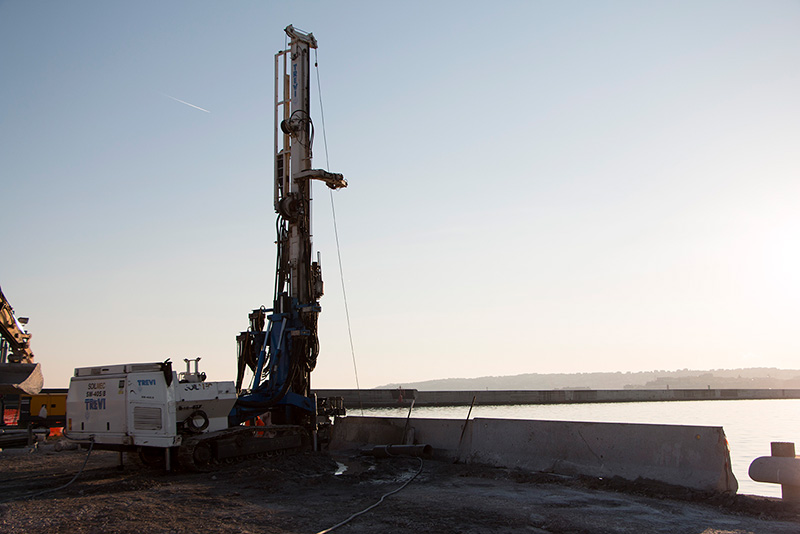 Activities and works to be executed within the scope of the contract are:

• execution of the combined double-wall made of steel (sheet pile), to be filled with inert material, with sealed joints, driven until reaching the tuff formation that extends for about 20-25 m from the average sea level. The sheet piling is the main part of the supporting structure of the quay; it is 630 m long, with a depth of about 18 m, allowing the berthing of two container vessels with size corresponding to the vast majority of the today containers. This part of the work delimits the seaward tank according to the waterproofing criteria required for the project;
• construction of plastic diaphragm walls suitable to confine the tank filled according to the waterproofing criter ia se t b y the project (k <10-9 m/s);
• construction of bored piles within the main elements of the above mentioned combined double-wall, serving as foundation for the upper superstructures on the dock surface (dock cranes, etc.);
• consolidation of the seabed with jet-grouting technology in the areas of the tanks for the intake and discharge of the cooling circuit of the Tirreno Power Plant;
• consolidation of the Progress pier head with micropiles and jet grouting;
• environmental dredging of the contaminated sediments at the bottom of the dock;
• among the works covered by the project, there is also the construction of a new cooling water system for the circuit of the TirrenoPower Plant, adjacent, towards the soil, with the eastern dock, whose structures such as pipes and tank intake and discharge systems, will be combined - to a large part - with the structures of the terminal dock.

The subsoil of the dock consists of the following layers’ sequence : anthropogenic backfill used in the construction of the dock and the dam (fill); sandy-silty soils of the bottom (upper sands); lithoid tufa (tufa); sandy soils of the bottom (lower sands). The geotechnical works envisaged in the project, such as the insertion of the sheet piling, foundations with bored piles , confinement diaphragm plastic walls and planned consolidations, reach, in depth, the lithoid tufa layer.