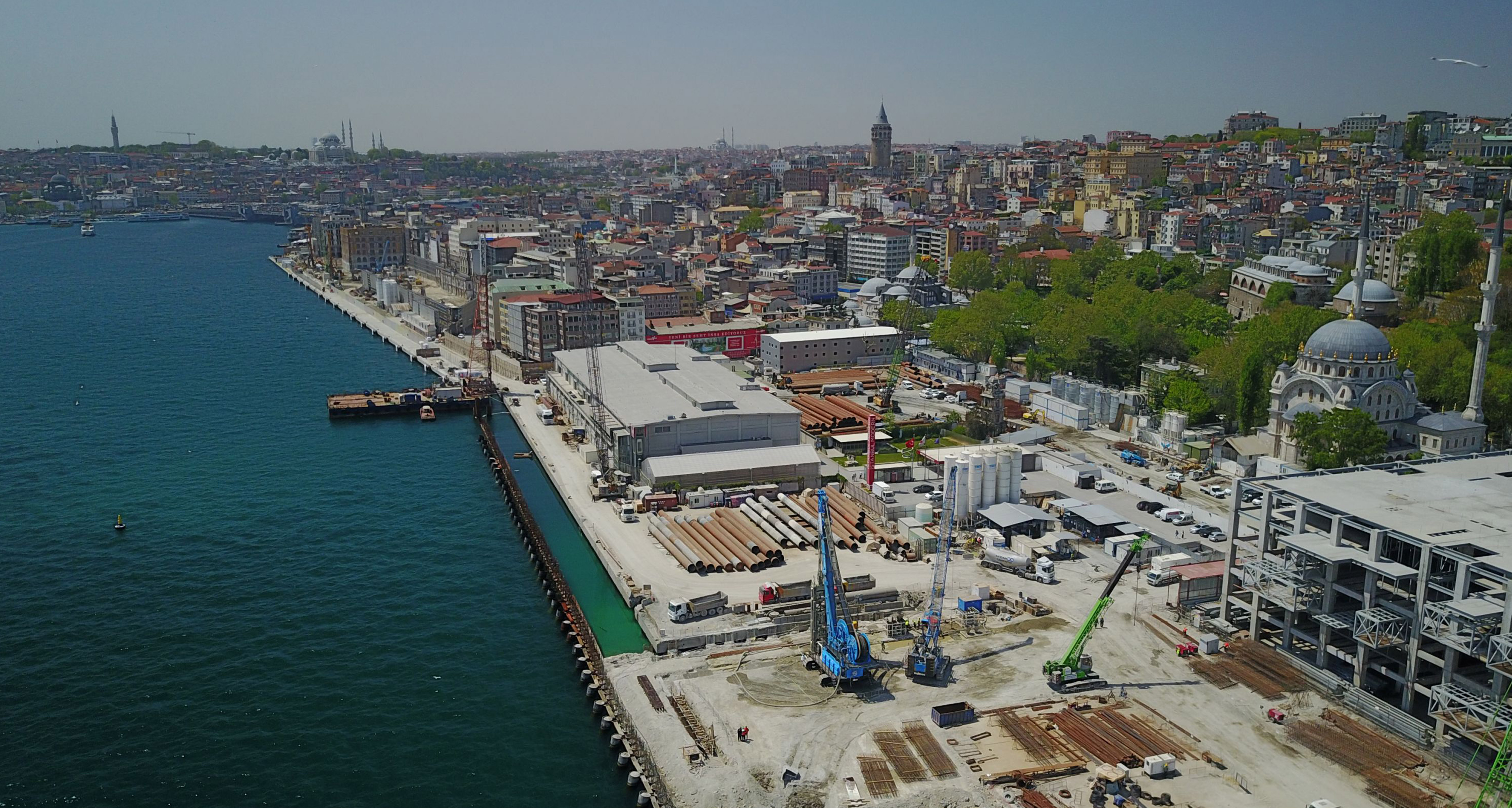 After a long period of inactivity in Turkey, Trevi got back into action by taking part in one of the most prestigious projects in Istanbul of the last decade: the Galataport Project, located in the ancient district of Galata, now Beyoǧlu, in the heart of the historical city center.
As one of the largest waterfront projects on earth, Galataport Istanbul has a total investment value of $1.7 billion including the tender bid, covers a length of 1.2 kilometers of coastline on the Bosporus and a total area of 100,000 m2. This unique coastline, which has been closed to public access for approximately 200 years, will be opened for the use of Istanbulites and the visitors of the city.

The Project is divided in two packages: Salıpazarı and Karaköy, which were firstly issued as two different tenders and were eventually both awarded to Trevi.
The concept tender design was deeply studied by the engineers of Trevi Design, Research & Development office, who proposed several technical improvements and alternative solutions, which resulted in a more sustainable design strategy and a cost saving to the client. Therefore, Trevi acted as both main contractor and proposal designer for all geotechnical engineering works.
The difficult hydraulic and geotechnical condition, the seismic hazard of the site, the presence of historical buildings that need to be strengthened, the simultaneous reconstruction of the quay by other Contractors and the continuative operation of the port while running of construction activities, required the employment of cutting-edge technologies within the foundation engineering field.

The Salıpazarı package included the construction of an underground cruise port terminal, for which the whole 65,000 m2 large site needed to be excavated down to approximately 15 m below ground level (13 m below sea level). The ground surface on top of terminal has been designated for seaside promenade, walking paths and public squares. The related foundation works included the execution of a 1,200 mm thick anchored diaphragm wall, which was executed by both mechanical grab and hydromill, (50,000 m2 of D-Wall and 30,000 m of ground anchors), a massive soil improvement against liquefaction by vibro replacement (100,000 m of stone columns) and Deep Soil Mixing by TurboJet® (250,000 m3 of treated soil), a pile foundation composed by 1,000 mm diameter bored piles (35,000 m) and the implementation of a dewatering system for the whole site.

The Karaköy package, in addition to the re-construction of its portion of quay, consisted of the refurbishment of five existing buildings. The non-historical buildings were demolished and the foundation works within their footprint consisted of a 1,000 mm thick propped diaphragm wall/secant pile wall, which were executed by both mechanical grab (18,000 m2 of D-Wall with 200 steel props and 7,000 m of secant piles), an hydraulic bottom plug in order to reduce groundwater flow during excavation and related settlements of adjacent buildings, executed by 2,000 mm double-fluid jet grouting overlapping columns (45,000 m3 of treated soil), a lattice-type soil improvement against liquefaction composed by elliptical jet grouting columns (50,000 m3 of treated soil) and a mesh of permanent tension micropiles against uplift, composed by Double Corrosion Protected (DCP) steel bars (10,000 m). For what concerns the hystorical buildings that were preserved, the related foundation works needed to be conducted from inside the buildings, with reduced headroom and consisted of a massive soil improvement against liquefaction by single fluid jet grouting (40,000 m3 of treated soil) and structural underpinning by means of micropiles (2,000 m), in order to allow the excavation of a partial basement underneath the existing foundations.
For both Salıpazarı and Karaköy packages, Trevi installed and managed a massive monitoring system to keep under control the movement and forces acting on the different components of foundation system, the surrounding soil and existing buildings.
All above listed activities were be executed almost simultaneously, which brought additional difficulties to the project. 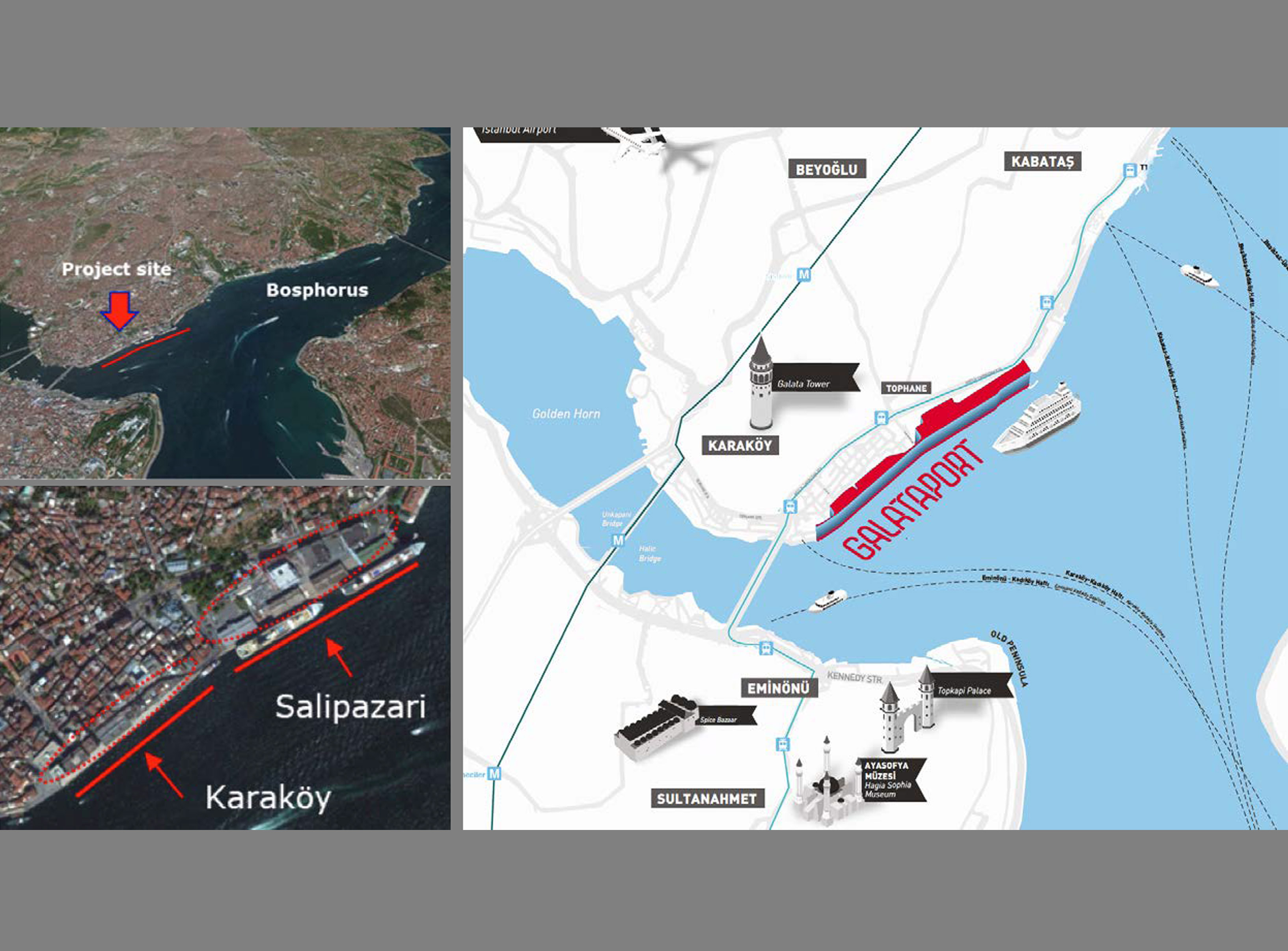 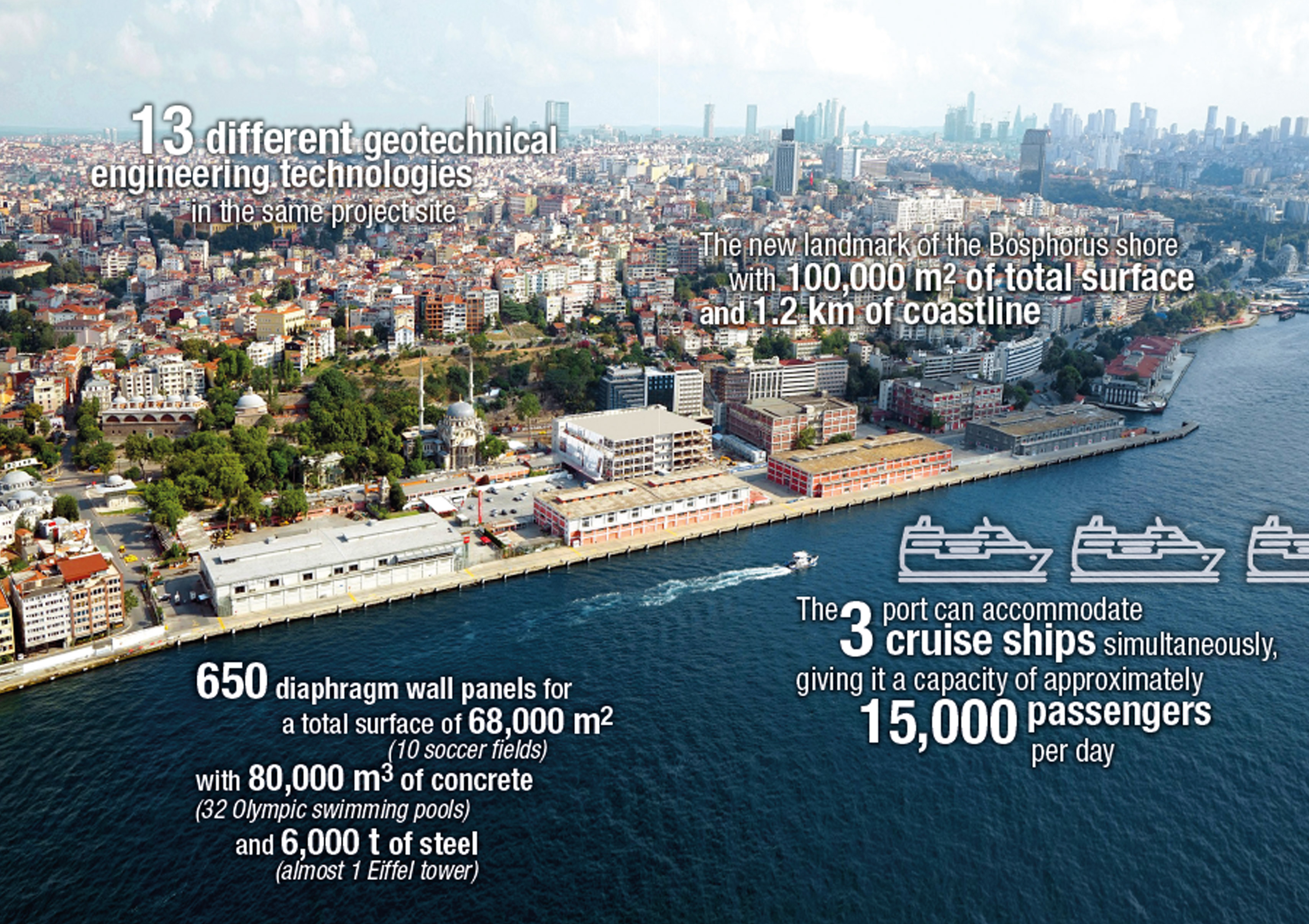 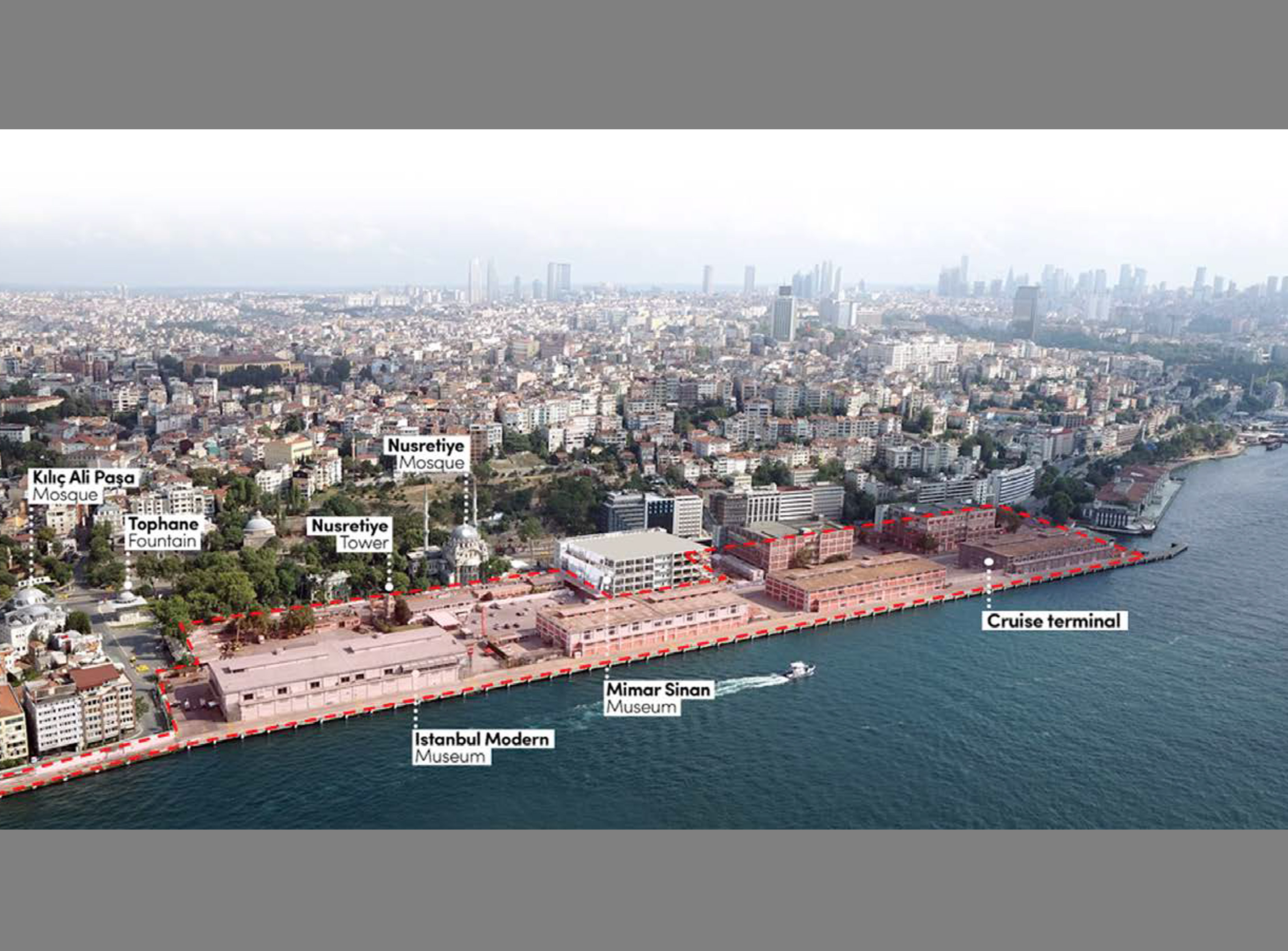 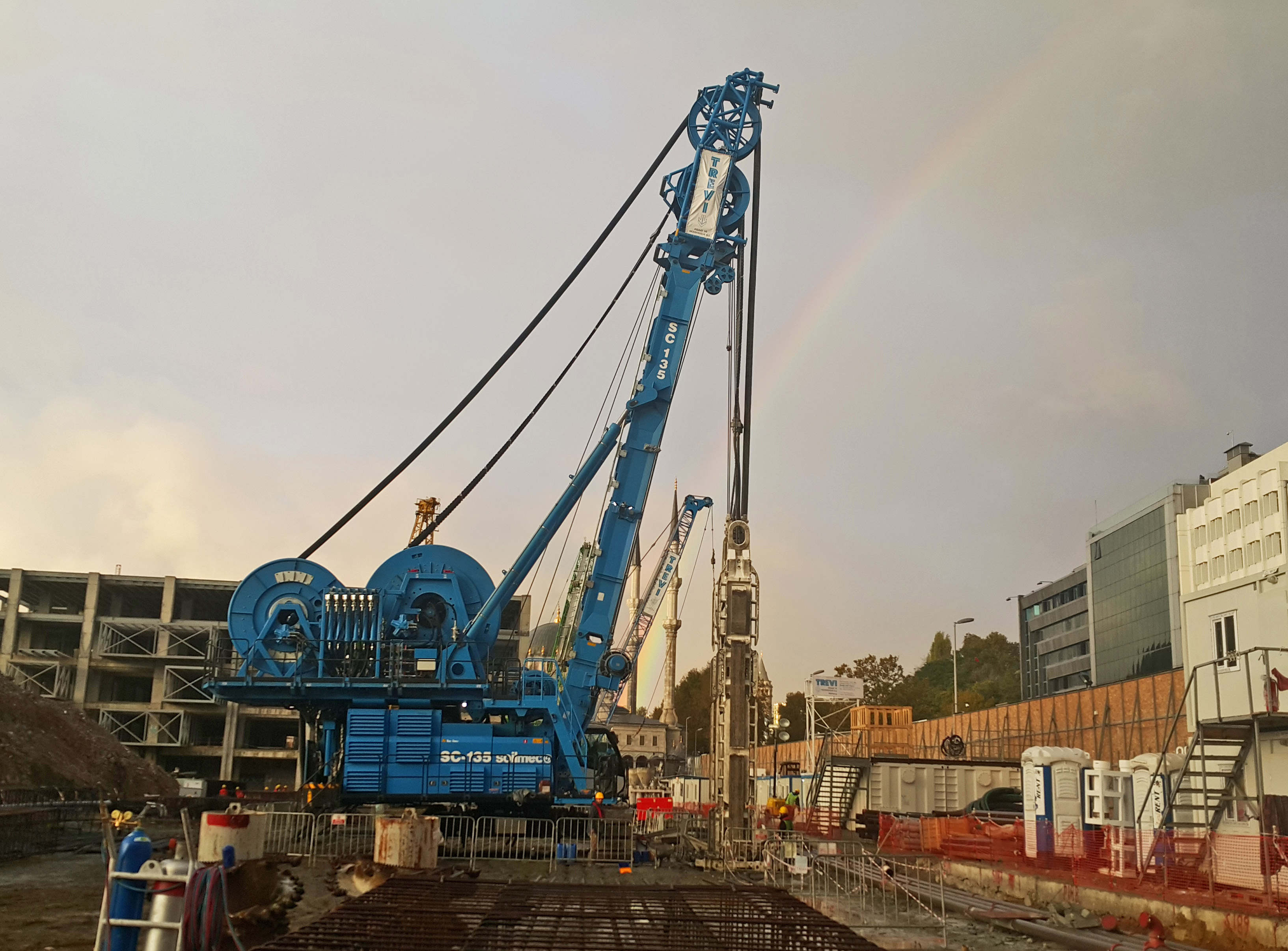 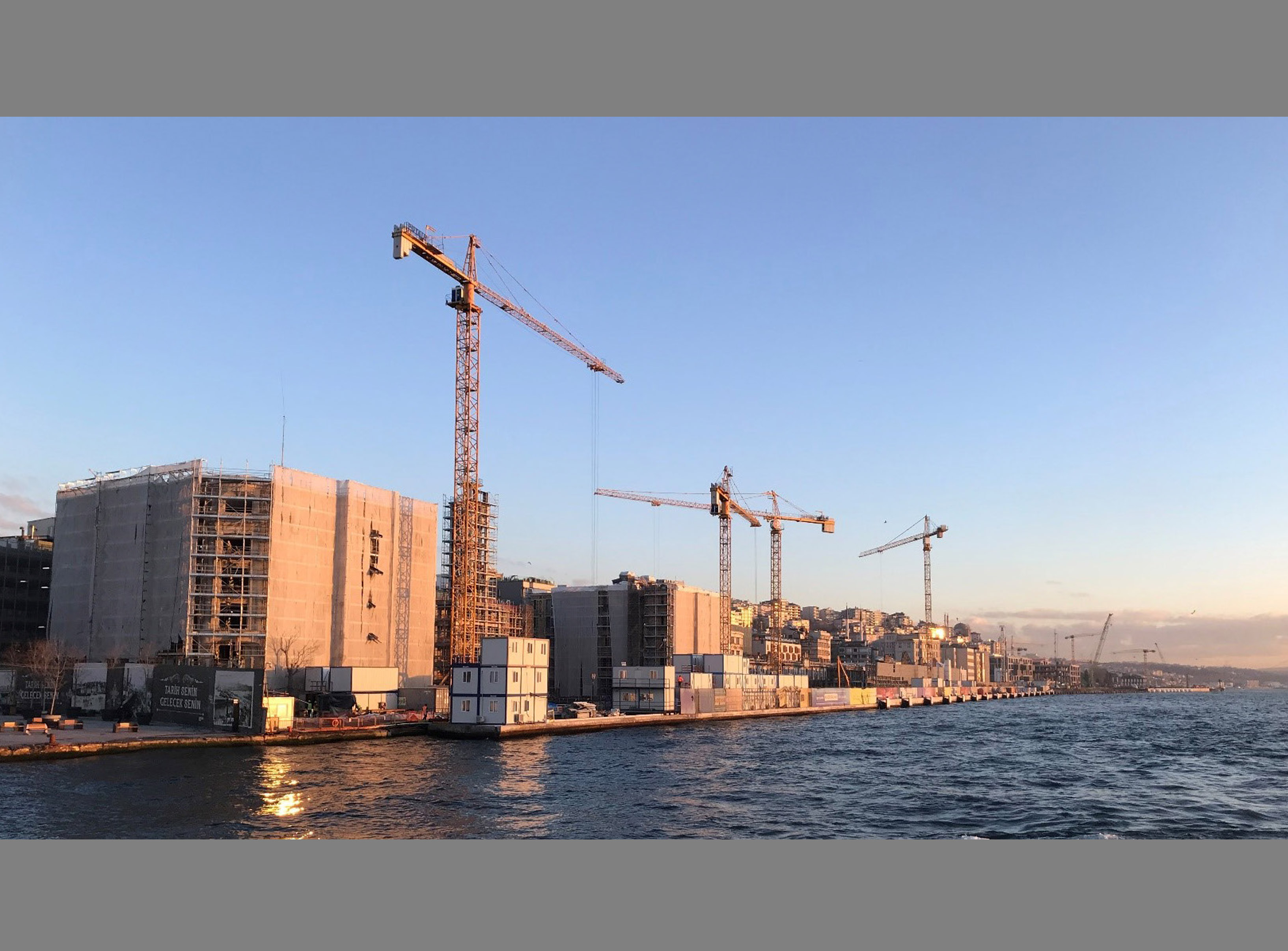 The new quay of Salıpazarı

An interesting design solution was adopted for the seaside section of the new quay wall and terminal building. The new quay is composed of a combi-wall, formed by bored-cast-insitu piles, excavated through a driven permanent steel casing, which was installed from a barge, while demolition of the existing deck-on piles was started.
The main alignment of contiguous piles is supported by inclined piles installed at the center/center distance of 5 m. Subsequently, the area was backfilled with a gravel-size controlled fill, which was lately improved by a massive deep soil mixing treatment, consisting of 1500 mm diameter tangent columns.
The soil improvement had three main goals:

The soil improvement underneath existing buildings in Karaköy

Some historical buildings in Karaköy were registered as first-degree cultural heritage and needed to be completely preserved during and after construction works. They were restored to be part of the future port facilities. Since the existing structures and foundations had to be strengthened, the mechanical properties of the bearing soil needed to be improved in order to sustain the new increased loads. For this reason, 1.5 m diameter, tangent single-fluid jet grouting columns were designed by the Engineer, which had also the scope of reducing the risk of liquefaction of the loose in-situ fill and sand. Since a partial basement (excavation down to - 5.2 / - 6.5 msl) needed to be excavated underneath the existing buildings, the jet grouting columns were overlapped around the area of excavation and worked as a watertight gravity retaining wall during the excavation. In order to allow the excavation of the partial basement, a set of underpinning micropiles was designed by the Engineer. All jet grouting columns were
executed to the maximum depth of 21.5 m (from WPL at +1.5 msl to toe level at -20.0 mls), while micropiles were executed from the working platform level of +1.6 m msl and toe level ranged between -10.5 m and -12.0m msl.
Therefore, micropile maximum length was 13.5m. All activities were carried out from inside the existing buildings, with a reduced headroom (maximum free height of 3 m).

Among all interesting geotechnical works executed in Karaköy site, a special mention needs to be made to the Multi-Purpose Bottom Plug (MPBP). This innovative geotechnical was employed for the excavation within the footprint of the demolished buildings, to allow their reconstruction with 2 or 3 basement floors.
The MPBP solution is a combination of seepage control, ground improvement, and load bearing elements, which was adopted to allow the deep excavation within the footprint of demolished buildings. Excavation depth was approximately 12.5 m below the working platform (11.0 m below sea level).
The main body of the bottom plug is composed of overlapping jet grouting circular columns, executed with the double-fluid method and designed to have a 2,000 mm diameter. Columns are executed on a triangular pattern with an average centre to centre spacing of 1,500 mm.
The bottom plug’s thickness is the one strictly necessary to ensure the hydraulic stability of the excavation.
Subsequently, pseudo-elliptical jet grouting columns are executed from the top level of the bottom plug up to the excavation level on a lattice-type pattern, in order to act as a mitigation element to liquefaction. In particular, the pseudo-elliptical shape of jet grouting columns was chosen instead of the circular one in order to optimize the lattice geometry, by minimizing the amount of jetting and related time of execution. The lattice-type jet grouting treatment also acts as a foundation for the future building and will carry the vertical structural loads in permanent conditions. Average width in plan of elliptical jet grouting column is 4.0 m.
Finally, the stability of building against uplift is ensured by permanent Double Corrosion Protected (DCP) steel bars, which are installed as drilled and grouted micropiles through the previously-executed elliptical jet grouting columns. DCP steel bars have a diameter of 63.5 mm and are installed within a 250 mm diameter drill-hole.
The technologies involved and the electronic control devices employed for the execution of MPBP are of latest-generation. In particular, for the execution of the double fluid jet grouting bottom plug, the drilling rigs were equipped with the “Jet-Vision System” and with the “Drilling Position System” (DPS) electronic devices.
The former controls, monitors and records the automatic rising of the drilling tool/rods during the jetting phase; the latter monitors and records the 3D position of the drilling tool during the drilling phase, which is of basic importance to ensure the overlapping between the jet grouting columns and the consequent successful execution of the bottom plug. For the execution of pseudo-elliptical jet grouting columns, the Jet-Vision system was provided with the “orbital jet” option, which allows to modify the rotation speed during the jetting phase in a planned way. The rotation speed varies from Vr1 to Vr2 to create variable radius sectors.