THE LEANING TOWER OF PISA

The stabilisation of the Leaning Tower of Pisa was completed a long time ago. On June 16, 2001, the day of Saint Rainier (Pisa's Patron Saint), the citizens of Pisa were returned their monument. On December 31 of the same year the International Committee that had been established more than 10 years before with the task of studying and implementing measures to restore the tower to health, was disbanded. The Committee studies, the gradual and painstaking research and understanding of the tower's problems, the devising and definition of temporary and permanent stabilisation works and lastly their implementation have repeatedly been mentioned and dealt with in several scientific articles published in specialised journals. The executive planning and actual implementation of the works devised and planned by the Committee, though less known, but equally rich and interesting was carried out with passion, commitment and great skill by the Consorzio Progetto Torre di Pisa (Tower of Pisa Project Consortium) composed of the companies Trevi, Rodio, Italsonda, Ismes and Bonifica.
Because of two-fold risk (geotechnical risk of overturning and structural risk of failure due to brittle fracture) and also because of the worsening situation, the Committee adopted a two-stage strategy: immediately carrying out temporary stabilisation works, making sure these works were reversible, so as to buy some time and then carefully study, experiment and implement the final stabilisation works.
As with regards to the structural risk, temporary works consisted of circling some parts of the Tower with slightly pre-tensioned strands. Final, permanent works consisted of inserting stainless steel bars to connect the inner and outer surfaces, performing injections in the masonry works and wrapping the top of the first order and the bottom of the second order with harmonic stainless steel wires; these works affected very small areas of the Tower.
As with regards to the geotechnical risk, the temporary works consisted of applying a counterweight to the Tower, on the Northern side; the counterweight was made of a pile of lead ingots weighing about 1,000 tons.
the Committee decided to reduce the Tower inclination by about one half degree, inducing controlled subsidence beneath the Northern edge of the foundation. In addition to substantially improve the stability conditions of the foundation, these works should also be able to reduce the tensile stress in the Tower, thus reducing the necessary structural reinforcement; moreover, this work would also fully respect not just the formal integrity of the monument but also its material and historical integrity. 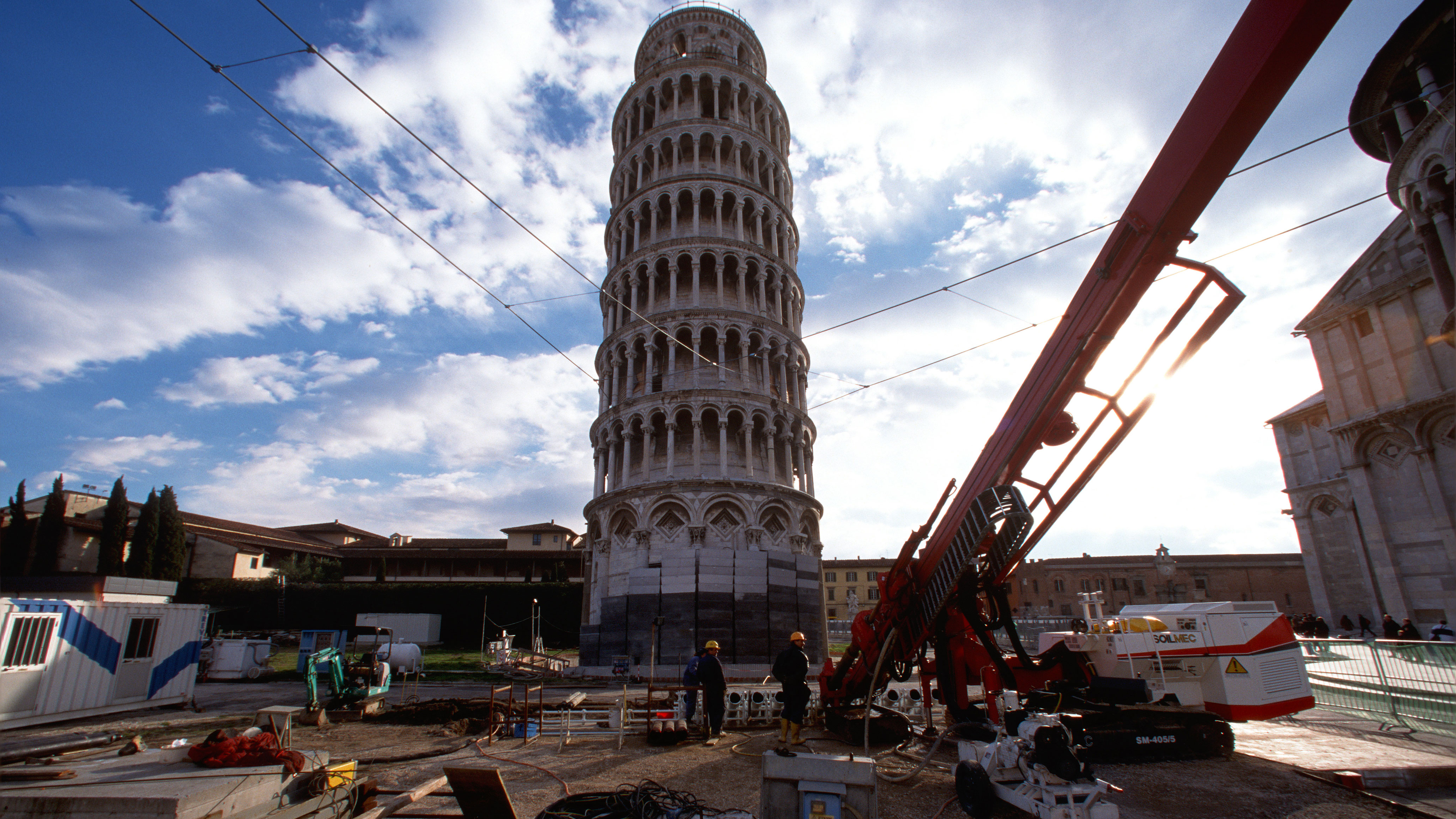 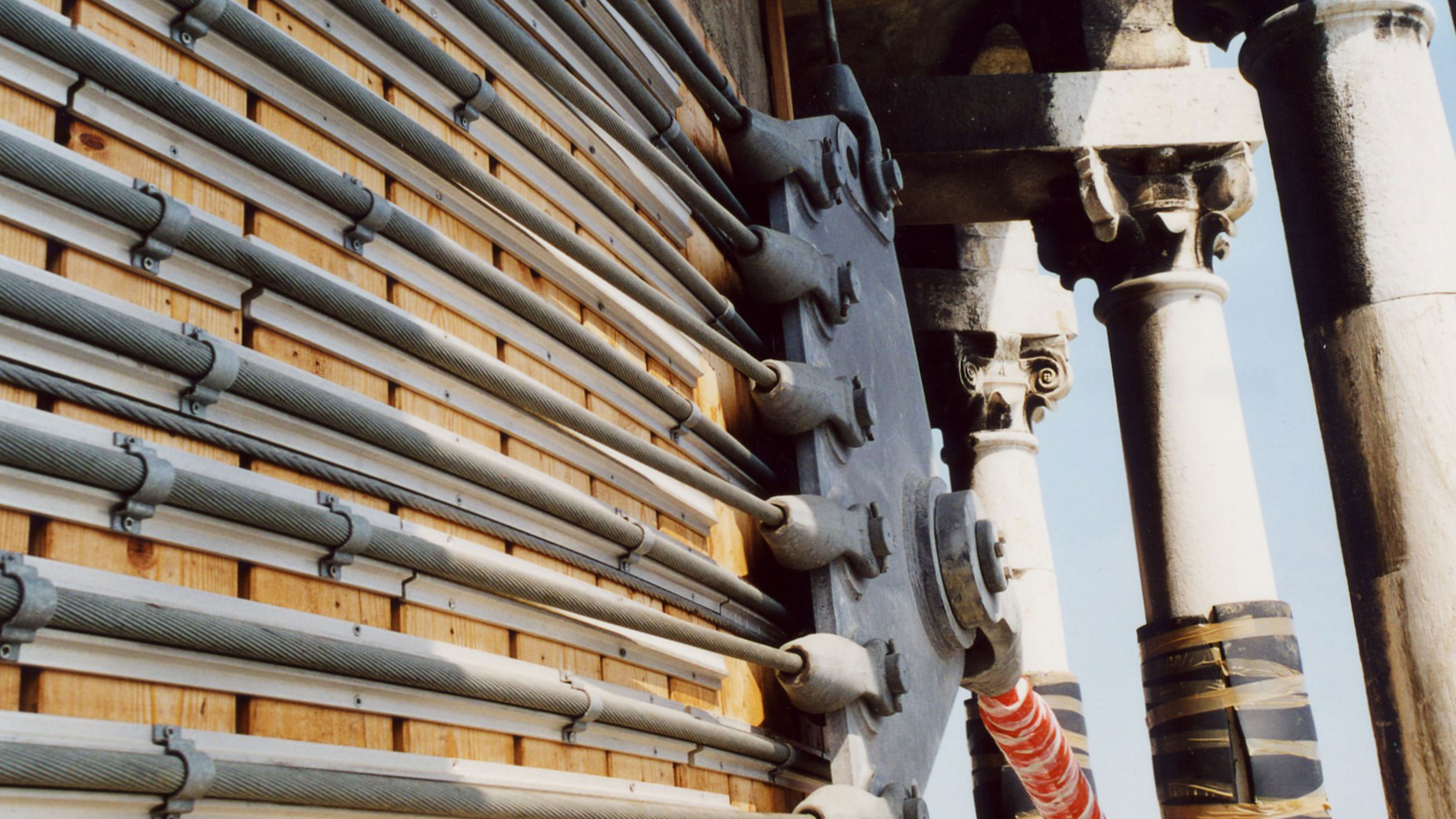 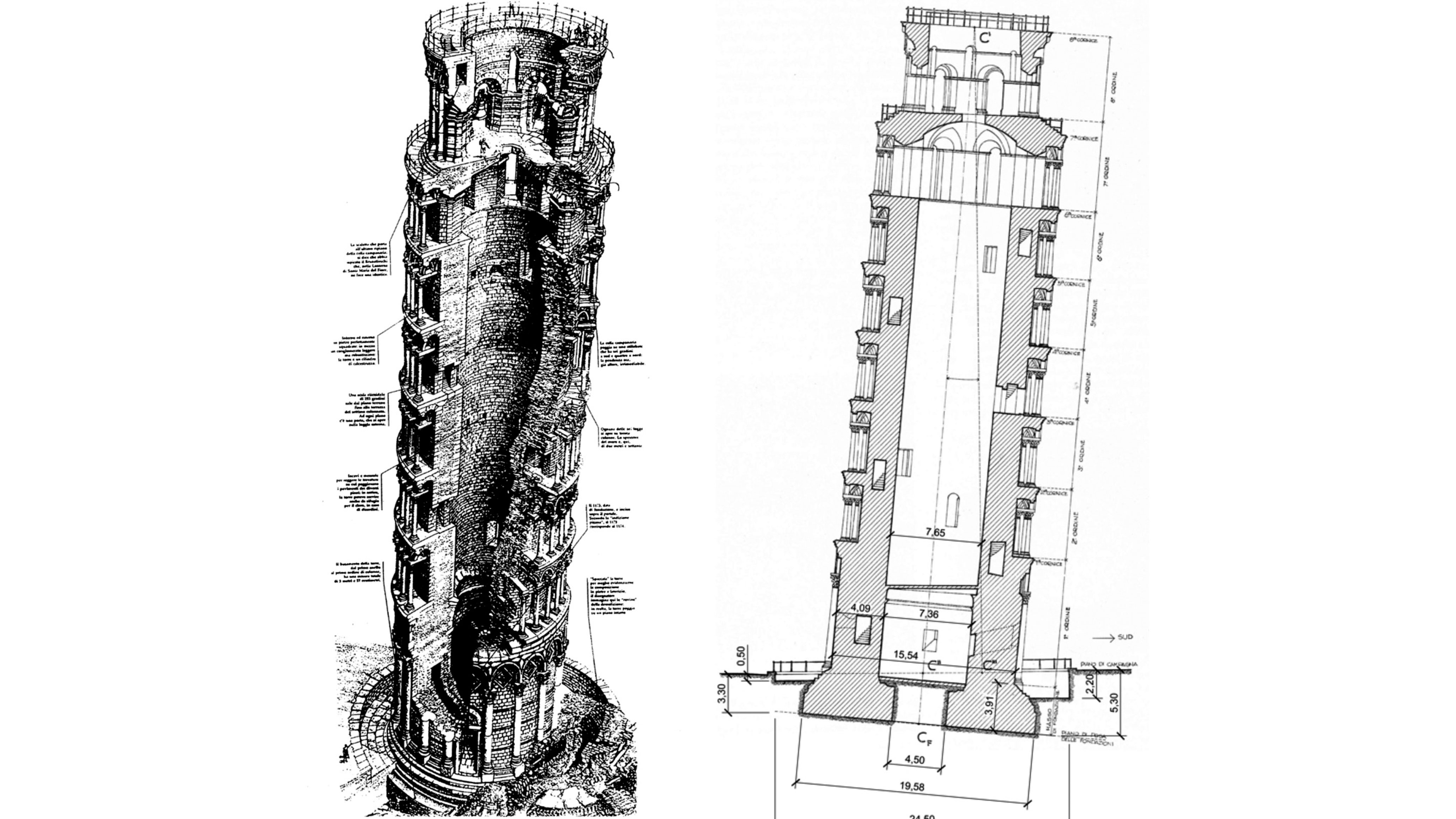 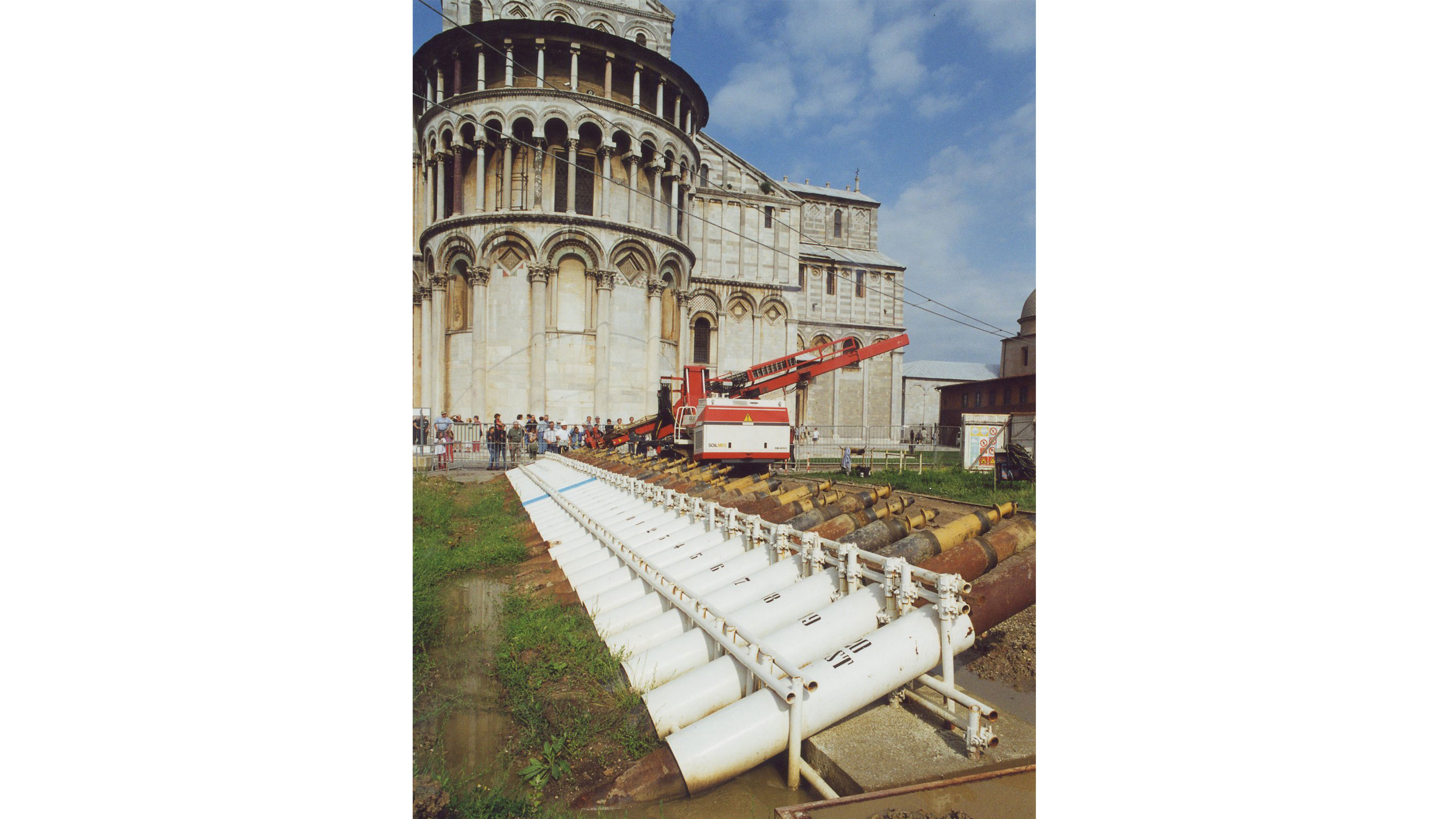 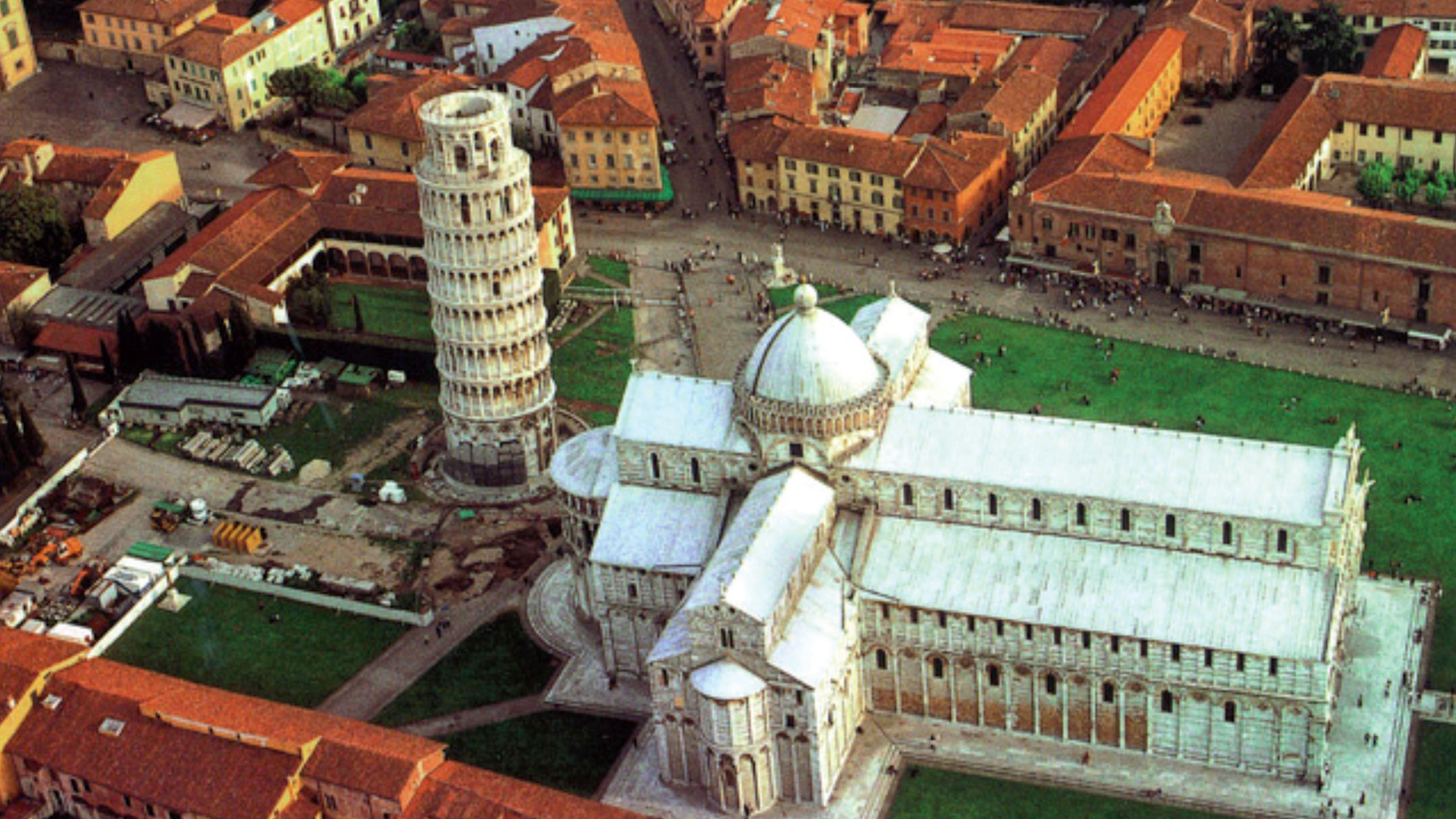 The Committee reviewed several possible means to reach the desired result: the final decision was to carry out a small intervention that caused settlement of the Northern side of the Tower by means of the controlled extraction of small amounts of soil on the North side, below the foundation level (so called underexcavation). Before working on the Tower it was decided to carry out an in-situ large-scale test. For this reason it was decided to start working on the Tower with a limited preliminary under-excavation stage to be started only after having installed a safeguard structure that could effectively cope with unforeseen events. After that the actual Tower under-excavation works started, in turn divided in a preliminary stage and a final stage. Once all the temporary structures were removed, the Catino had to be restored and reinforced, a series of works with a highly structural nature.
During the works a complex monitoring system had been installed to continuously monitor several parameters, relevant to Monument control. After the works had been completed, the monitoring system was modified as needed, to adapt it to the different needs of control of the Tower's behaviour over time.

At the end of the under-excavation works the tower had rotated about 1,800 arc seconds (half a degree) towards North, and because of this the 7th cornice moved towards North by about 43 cm and the Northernmost point of the Catino was lowered by about 17 cm. The "straightening" works, in addition to returning the Tower to the inclination it had about 200 years ago, reduced the pressure on the soil to the South to such an extent that it increased significantly the safety level of the Monument which, as far as instability is concerned, had almost reached the critical limit before works began.
Request information
Trevi S.p.A. 5819, Via Dismano 47023 Cesena Italy | Phone +39.0547.319311 Fax +39.0547.319313
Contact us
}